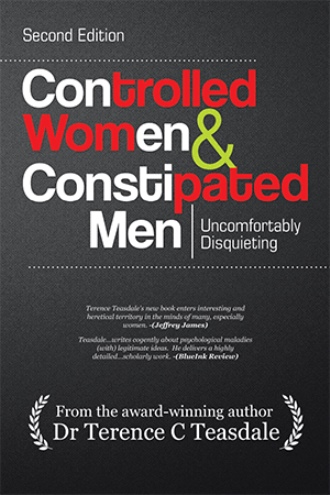 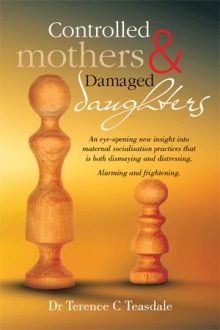 Terence Teasdale's new book enters interesting and heretical territory in the minds of many, especially women. Dr Teasdale's book explores the tyranny of the female gender in a way that one hundred or so other books deride the opposite gender. It is a most timely book (long overdue). The ladies should be able to handle it, as indeed we are all equal! Dr Teasdale's book is confronting and controversial. A lot of women will hate it! Jeffrey James This book is not a “feel good” book. This book will not enrapture most women. Certainly, not those I call controlled women. But, there again, it is not meant to imparadise women, even though its entire contents are devoted to them. The book is about women who are psychologically disturbed. And this means most women. It is about women who are controlled for their entire lives by negative emotions: emotions that are so potent that they convert into disabling mental disorders, gobbling-up self-esteem, and by bizarre and inappropriate behaviour, impairing and even destroying relationships. For sure, this book is about the severe damage controlled women inflict on themselves and others, especially their vulnerable children. Neurosis and depression in women and our late adolescents are increasing at an alarming rate. Controlled women are a demoralised gender.

Dr Terence C Teasdale, after being expelled from school in England where he grew up, has followed and developed an interest in mental philosophy, emotional disorders, and personality tendency. He has studied in universities on three continents. While working in clinics and private practice with thousands of patients (mostly women), and giving keynote addresses and seminars in 49 countries across five continents, Teasdale specialized in androgyny, emotional disorders (anxiety, depression and narcissism), neurosis in women, human relationships, and Asian cultural thinking. He has written extensively in the fields. Mr Gough Whitlam, Australia’s 21st Prime Minister, described him in Canada as “one of the world’s leading authorities on human relationships”. He has worked closely with the private sector and with many governments. Teasdale’s interests are sport, talking, observing, dining, travelling, philosophy, writing, music, and bridge. He married after meeting his wife-to-be in Switzerland while skiing. They had three children. Teasdale enjoyed success in many sports, especially tennis and athletics, becoming a county champion and an All-England athlete. He became a county chess player while still a teenager. After earlier publications, Teasdale ventured out and wrote his first novel, Trafalgar and Josh, which claimed the title: Book of the Year. He is also the author of Controlled Mothers and Damaged daughters: a sequel to this book. Teasdale is presently in South-East Asia researching the topic of his upcoming book: The Thai Mind.