Rockin' the Classics and Classicizin' the Rock: 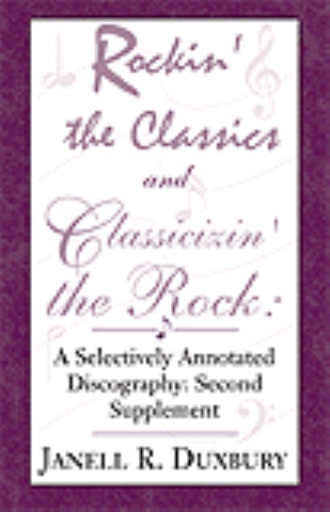 Rock music of all varieties has been influenced by classical music and vice versa, both in the form of direct quotes and in the form of borrowings of style, composition, and instrumentation. The average listener may be unaware of the many links between rock music and the classics. One might remember a few examples, such as Walter Murphy's chart-topping "A Fifth of Beethoven" or Eric Carmen's "All by Myself," but pass them off as interesting anomalies. However, the influence of the classics on rock music is pervasive and grows from a long line of precedents. This second supplement to Janell R. Duxbury's original 1985 discography, Rockin' the Classics and Classicizin' the Rock, brings the earlier work and first supplement up-to-date with hundreds of new entries documenting recently released or newly discovered examples of the interconnection between these musical genres.

Duxbury details nearly 700 new examples of recorded rock instrumentals and songs that borrow musical themes from the classics. Variations range from contemporary renditions of complete classical works to brief classical quotes or phrases subtly incorporated into rock compositions. Duxbury also gives additional examples of recorded orchestral versions of songs originally composed and/or written by rock artists. In these examples, the musical style varies from strict classical interpretations to pop-style orchestral renditions. The second supplement then expands Duxbury's original compilation of sound recordings and live performances of rock groups performing with established orchestras and choruses, selected samples of recorded rock music that simulate baroque or classical sound/structure, examples of the manifest influence of rock on classical music, and instances of rock artists and classical artists switching roles. Lastly, this discography updates the 1985 version and the first supplement with new information, expanded details, and minor corrections to the earlier works. An extended list of selected non-rock background examples is included in several new appendixes. The Preface is updated. A general index includes the names of classical composers, rock artists and groups, orchestras, choruses, orchestra conductors, sound recording producers, and song or instrumental titles. With its incomparable scope and content, this supplement, together with Duxbury's previous discography, and its first supplement will be appreciated by students, researchers, record collectors, trivia buffs, music industry employees, and fans of rock music and the classics.

Janell Duxbury is the author of both the discography Rockin’ the Classics and Classicizin’ the Rock (Greenwood Press 1985) and its first supplement (Greenwood Press 1991). The second supplement includes many new additions, especially in the sub-genres of progressive rock and metal. Her “Rock-Classical Connection Web Page” (http://www.geocities.com/Vienna/8660) is dedicated to the topic presented in her discography and its supplements. She also published the journal article "Shakespeare Meets the Backbeat: Literary Allusion in Rock Music" Popular Music and Society (v. 12, no. 3 / Fall 1988). She’s been a fan of progressive rock and progressive metal since 1969, with the usual British invasion fascination prior to 1969. Her educational background includes: BS 1973 Secondary Education - Earth Science; MS 1974 Library Science; MA 1978 Communication Arts - Radio, TV, Film. She is a Librarian in Central Technical Services-Humanities at the Memorial Library of the University of Wisconsin-