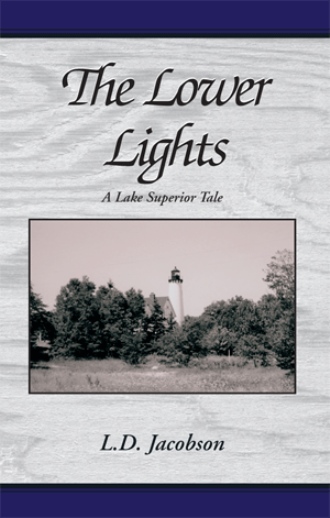 Lake Superior is the largest and coldest of the Great Lakes, a three hundred and fifty mile chasm filled with some of the coldest water in the world.

The source of its anger is Jimmy Parker, who inherited a lot of money when his parents died and up until now has been very prudent and careful with it. But when he purchases two hundred acres of shoreline property on Lake Superior in Michigan’s Upper Peninsula, he takes a chance to fulfill a childhood dream.

He gets much, much more.

His purchase is laughed at by his brother, and questioned by his best friend, Gwen. But Jimmy has never felt more positive about anything in his life.

On that property, on a hillside west of the village of Grand Marais, Michigan, lies the remains of an old lighthouse.

Once a symbol of hope to those who had lost their way on the cold lake, the building has been reduced to a forgotten collection of crumbled mortar and broken glass. Stories of the original lighthouse keeper still filter through the community. Stories of a man obsessed with the responsibility of tending the light. Of a man who didn’t just live inside the lighthouse, but became a part of it.

And then Jimmy decides to have it rebuilt.

Once he does that, he unwittingly jumps into a centuries old war between the fury of the lake, and one man’s determination to defy it.

Shortly after the rebuilding is complete the lighthouse shines again.

And once again a vessel lost on Lake Superior is brought home safely.

Except the vessel is the Lucerne.

Soon other vessels come ashore in respone to the lighthouse’s call: The Thomas Wilson, which went down after a collision with another ship in 1902; the Hudson, a freighter that took 24 men to the bottom of the lake with her in 1901.

The lake is losing its prized trophies to “the light along the shore.”

Jimmy finds himself on the front line of a grudge match between the lighthouse and the lake. A tug of war between the light of promise, and the darkness that is the bottom of Lake Superior.

Now with the aid of the local historian, Jimmy is scrambling to find a journal once kept by the original lighthouse keeper. If he can find it, he might better understand the spirit of the man who once tended the light, and why that spirit rages on all these years later.

But he’d better do it fast.

Because with each passing day more and more people are drawn to Grand Marais, pulled in for some unknown reason to the shoreline where the old ships are resting. They arrive in cars and motorhomes, in groups or by themselves.

They arrive not looking for answers, but for some final conclusion to the tragedies that have marked their own lives.

Tragedies that are inexplicably linked with the force that is Lake Superior.

As they race to find the old journal, Jimmy’s relationship with Gwen undergoes a transformation. And suddenly seeing this thing to the end doesn’t seem as enticing without her with him.

He feels that the lighthouse is his responsibility. That it’s now his watch.

But it won’t be easy.

His opponent is the largest body of fresh water in the world. A body of water so cold death results in minutes. One that can lull you to sleep with serene calm one minute, then lash out with frightening authority the next.

An opponent without eyes Jimmy can see or a voice that he can hear, but one with an unearthly fury that only grows as each ship rises.

An opponent whose anger is unleashed in the explosiveness of its assault on the shoreline. And an opponent who waits, patiently and menacingly, for Jimmy to make a mistake.

Because if he does, then the lake will welcome him, as it has thousands of others, into the “Graveyard of the Great Lakes.”

The village of Grand Marais is very much real, and very much a part of my life. So is t

When he was eight years old, L. D. Jacobson wrote a short story about giant fruit ransacking his hometown of Jackson, Michigan. Twenty-four years later he’s still coming up with ideas, although to this day that tale about fruit remains the most fun he’s ever had writing! His work has appeared in newspapers, fiction magazines and trade journals, but nothing compares with taking the smallest idea and shaping a story around it. He still lives in Jackson with his wife and three children, but his summers are spent on a lake near the Fox River in Michigan’s Upper Peninsula