Thinking Critically About Science, Religion, and Your Private Beliefs 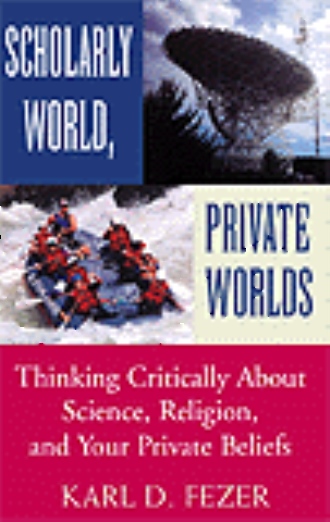 Informal logic is a discipline that examines the validity of the arguments we encounter in everyday discourse, from political speeches, to editorials, to posts on social media. Karl D. Fezer's work is nothing less than a tour de force of informal logic.

This important book investigates under what conditions our beliefs are warranted and the limits of the methods by which we derive them. The author is not concerned with validating or debunking any particular worldview, religious or scientific, but with examining the grounds on which we form the views that we do, in fact, hold.

The book's first part discusses the distinction between the views we harbor in our inmost hearts and their extension into the social realm, where we encounter a multiplicity of views different from our own. In the second part, Fezer presents good reasons why we might doubt the beliefs we hold. In his third section, he discusses methods by which we might form views that are worthy of being called rational. The final section covers the differences between science and religion and the limitations inherent in attempts to reconcile competing worldviews.

Fezer also contributes to the debate around teaching Creationism in schools. He makes an argument for limiting the curriculum to accounts of the natural world that do not introduce supernatural principles. However, Fezer is not anti-religion, and he discusses both religious and humanistic viewpoints neutrally.

The author notes that he is attempting to fill a void in university liberal arts curricula. As such, the book has the structure of a textbook, complete with questions for further study in an appendix. However, it is written in crisp, readable prose. Readers who aren't intimidated by the textbook style will find a cogent, forceful presentation that is likely to challenge his or her convictions in a non-threatening and highly impressive manner.

In keeping with the thesis of this book, and especially as a teacher in a publicly funded college, the author aspires to be so fair to all sides-on matters controversial for good reason-that students cannot discern his own commitments. Whether this goal is achievable or not, in a book about science and religion the author should lay his cards on the table. He was raised as a liberal Lutheran, in college became a member of the Society of Friends (Quakers), and since then has become skeptical about many of the claims, even of that modest religion.

Intending a career in agricultural research, the author did his undergraduate work in Cornell University´s College of Agriculture, majoring in botany. This was followed by a year in Haverford College´s then newly initiated Graduate Program in Social and Technical Assistance. Four more years back at Cornell led to a doctorate in Plant Pathology, with minors in Plant Breeding and Agronomy.

Six years were then devoted to research on diseases of barley and wheat at the University of Minnesota, and to participation in the breeding programs on these crops. During this time the author cultivated broader interests in the history and philosophy of science, which led to a year teaching undergraduate biology courses at the University of Minnesota, Morris, and to three years on the faculty at St. John´s College, the "Great Books" college in Annapolis, Maryland. There, all faculty have the rank of "Tutor" and are expected, eventually, to guide students in all courses in the completely required curriculum. In his years at St. John´s, the author read many ancient and more recent classics, including many important in the history of mathematics, astronomy, physics, and biology. Then, at Concord College, a state college in Athens, West Virginia, from 1966 until semi-retirement in 1998, as chair of the Biology Department from 1967-1985, and with guidance from diverse summer institutes and workshops and from participation in Science in Society seminars at near-by Virginia Polytechnic Institute and State University, the author taught, more or less frequently, general biology, genetics, microbiology, evolution, biology seminar, and independent research, as well as general physical science, astronomy, science and religion, ethics, and other courses. He still teaches his course in science and religion.

Visits to the college in the late 1960s by Henry M. Morris-pioneer and leader of "scientific creationism"-induced the author, thenceforward, to become an observer and critic of this movement. In the early 1980s, under the leadership of Stanley L. Weinberg, and working with representatives from other states, the author helped found the National Center for Science Education, Inc., which focuses on education about evolution and the nature of science. The author served on its first Board and was editor of its bimonthly periodical, then called Creation/Evolution Newsletter, 1984 through 1988. He remains involved in the creation/evolution controversy as it continues to simmer in West Virginia. That controversy provides a wonderful focus for bringing together the findings from diverse disciplines. Work on the present book began with an Interdisciplinary Incentive Award for 1980-81, made jointly by the National Science Foundation and the National Endowment for the Humanities. This made possible a sabbatical as Visiting Scholar at Harvard University, with studies in its Divinity School and in its Departments of Philosophy and of the History of Science. Since then, the author has used the book, at various stages of completion, as a text in his course in science and religion (see Thoughts for Teachers). The course based on that text was one of the Templeton Foundation Science and Religion Course Award winners in 1997.

A sabbatical at Harvard has to be a golden opportunity, not only to learn, but to assess whether one´s thinking is in touch with mainstream scholarship. I am indebted to George Rupp for the institutional arrangements that rendered viable my application for an Interdisciplinary Incentive Award, and to the National Science Foundation and the National Endowment for the Humanities which jointly created and funded this award program. That award enabled me to take courses from, and/or to discuss my project with, leading figures in relevant fields, at Harvard, at other institutions in the Boston area, and also with other visitors to, and graduate students at, Harvard. I express my gratitude to the many persons who read early chapter drafts and agreed to discuss them with me. I also thank those who helped me track down the details of diverse biological phenomena, many of which ended on the cutting room floor as far as this book is concerned, but that I was able to use later in other contexts. As especially helpful and conscientious in reading and criticizing my early drafts, I must name Gordon Kaufman, John Beatty, and (at Cornell) Edwin A. Burtt. James F. Davidson provided a detailed critique of large parts of a later version, and Norman L. Grover did the same for the entire manuscript as it was nearing completion. Both did much to fill gaps in my knowledge of history, religion, and philosophy, and to prevent me from making certain blunders. Current colleagues at Concord, who read and commented on all or most of the manuscript as it approached completion, include Stephen D. Rowe, Paul J. Kane, and Ronald A. Canterbury. At other institutions, persons who reviewed and commented on all or most of the manuscript included Henry H. Bauer, Joel Hagen, Alexander J. Werth, R. David Cole, and Dieter Henke. Anonymous reviewers for a major textbook publisher provided insightful critique. The following persons, associated with Concord College at one time or another, provided criticism and/or (sometimes endless) discussion of, and argument regarding, relevant issues: Jerry L. Blatt, Jack R. McMichael, David A. Freeman, Laurence E. Bayless, Frank E. (Ted) Reid, Raymond A. Durand, Daniel Rubinstein, and Kenneth H. Baker. Geochronologist G. Brent Dalrymple reviewed Chapter 14, and Molleen Matsumura of the National Center for Science Education made a number of very helpful suggestions. Over the years, students in my science and religion course, too numerous to mention individually, have provided valuable feedback. I am most grateful to all these many people, named here or not, for their interest and advice, though I did not take all the advice offered me. The flaws of the book may well be attributable to the latter fact. I must also thank faculty and staff at Concord who provided various forms of technical assistance, Cindy Stone for making some of the figures, and my colleagues in the Department of Biology at Concord for making my sabbaticals possible.

Though he died long before this project began, I want to acknowledge the influence of my father, Karl T. Fezer. A devout Christian, he attended a Bible-study group almost every Friday night. His faith and worldview embodied a keen sense of social justice. Contrary to what one might expect from the president of a small company manufacturing waterproof paints, he supported socialist presidential candidate Norman Thomas. During the Great Depression, my father reduced salaries, notably his own, to avoid having to lay off workers. I am grateful, too, to my mother, Junia, who lived through the early stages of the writing of this book and encouraged the enterprise. My son, Gilbert, read and critiqued the entire manuscript. Finally, I want to acknowledge the abundant editorial help of my wife, Lorraine, who has a good ear for language, and who had the patience to put up with the many delays of necessary projects occasioned by the writing of this book and related activities.