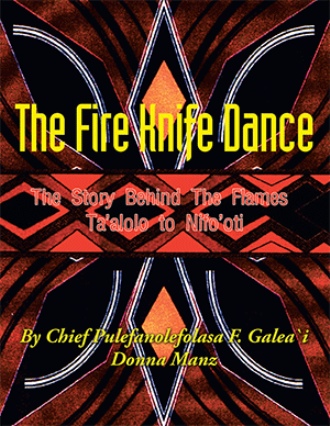 The book expresses the history of the Samoan fire knife dance (Samoan Ailao), from the time it was a victory ceremony of war to it’s modern day form. The explanation of the weapon nifo’oti (the deadly tooth or cutting tooth) is defined. The book elaborates the various stages of the dance from traditional to creative or a modern style, it also define how to build the actual knife itself. It also expresses how to formulate a dancing routine from its simplest stages to become a professional, to prepare the knife and body to take on the challenge to compete against the world’s best. The step’s of dancing with one, two, three and four knives are mentioned. It elaborate of how to perform with safety for the performer and spectators, it expresses the rules and criteria and how to build champions from broom sticks to the real ni’oti. The fire knife dance book I hope will satisfy all about the dance ailao, it’s origin and the story behind the flames.

Pulefano F.L. Galeai Pulefano was born on April 4, 1945 in the village of Mapusaga (peaceful) American Samoa. Pulefano learned and acquired all his cultural background including the ailao (twirl) from his father and grandfather. In 1954 Pulefano arrived in Hawaii and lived in a small Mormon community in the north shore, Laie. At age 9 Pulefano volunteered to work for the Hukilau Luau alongside his parents (a native Hawaiian feast), in cooking, ceremony, dancing, singing and performing the knife dance. Pulefano learing all he could from his father taught and instructed many others. In 1959, the Hilton Hawaiian Village Tapa-Room dir of entertainment Mr. Glenn Hughes and his wife visited Pulefano’s father’s searching for new talent, his father prompted him to do his best with the knife dance, it was the first time Pulefano danced with fire not knowing what will be the outcome. I went with the Hughes to Waikiki to become the youngest fire knife dancer in the world as the billing indicated. Pulefano’s career has just begun, his eyes never seen the glamour of show biz, within six months, he and his brother were hired by almost every major hotel that had a Polynesian production in Waikiki. Pulefano attended the BYU-H for a couple of semesters but his career as a knife dancer demanded, he worked for the Hawaiian Eye and Follow the Sun series and a regular on Lucky Luck’s world televised Luau. He later went to Hollywood to work for the 20th Century Fox film Corporation to dance and act in various serious, then the CBS Ed Sullivan Show, Hollywood Bowl with the Polynesian Cultural Center’s, with governor Ariyohi in the singing of the sister State with Okinawa, twice to the Lord Mayor’s Command Performance in Australia, invited twice to perform for the festivals of the Pacific Arts in Australia and New Zealand, assisted in the finale and Flaming Sword Competition in American Samoa, twice through the military oversea shows to Canton, Midway and Johnston Islands, also as a travel and insurance consultant in Conn and Mass. Won his first World title in 1964 in Hawaii and second in American Samoa Intercontinental by Office of Tourism. Since Pulefano been back to Hawaii he is the founder of the world fire knife championship 1993, the Kaua’i Poly festival fire knife competition, helped organized the American Samoa Flaming Sword Competition, the Anaheim Flaming Sword competition and lastly the fire knife competition of Maui and soon in 2014 the World Fire Knife Tournament of the Champions “Ua Pa le Lagi” the explosion from heaven in Waikiki with Papali’itele, Seiuli, To’oa and the lady who ties it altogether Cha Thompson, Tihati’s Production. Also in Hawaii Pulefano has organized and directed the Samoan Idol “Se na Pesemaia”, the Senior Citizen’s Got talent, chairman of the Samoa Mo Samoa Tupulaga Festival, the We Are Samoa festival, a community consultant to Dr. Posiulai, Tina’s Alamai Conference UH, recipient of the first Star of Oceania award UH, the Amakua Award by Dr. Stagner and the Life Time Treasure award by the Polynesian Cultural center. Pulefano has done translation work for court cases and was a member of the Civil Air Patrol in Weaver Base, Hawaii. In accordance with Pulefano all the things he has learned and acquired is through the divine guidance and love of his Heavenly Father, Pulefano has kept the faith and builds the Lord’s Kingdom even through all travel’s and contracts, Pulefano served twelve years in bishoprics, eight years as a high counselor among many others. A Life Scout recipient and Scout Master, Yes, his life is filled with glorious experiences that he will forever hold on to.