Where Such Unmaking Reigns 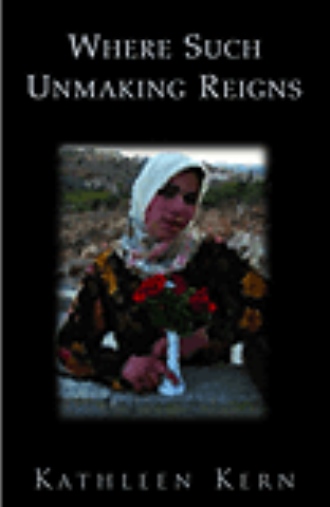 When a terrorist accidentally blows himself up in an East Jerusalem hotel, rendering Tess McAdoo¹s fiancé Yossi comatose, she

When a terrorist accidentally blows himself up in an East Jerusalem hotel, rendering Tess McAdoo’s fiancé Yossi comatose, she finds herself propelled into the world of the Israeli-Palestinian conflict.  Fortunately, she is so preoccupied with finding the right sunblock that most of the tragedies she witnesses do not cause lasting damage.

Yiphat, an Israeli human rights lawyer and Yossi’s sister, sends Tess to Hebron to stay with the Reformed Anabaptist Peace Team, aka the RAPTors.  There she meets Unmerited Grace Yoder, known as Eugie (U.G.)  Eugie, unlike Tess, feels all that happens deeply.  Her grim theology and disappointment with relationships give her a subversive energy that feeds into her passion for justice.  She had been in love with Yossi prior to his meeting Tess, and, unwilling to admit her jealousy and hurt, she begins projecting on to Tess the same seraphic qualities most men who encounter Tess do.

Eugie and Tess provide dueling viewpoints of subsequent events, which include the demolition of two Palestinian homes, the bombing of Ben Yehudah mall in Jerusalem and an attack on the RAPT members by Israeli settlers.

Since the Israeli police wish to use the testimonies of the team members to prosecute the settlers involved in the attack, Tess and Eugie are kidnapped by a group of right-wing Israelis and Christian Zionists (who believe that all Jews in the world must emigrate to Israel in order to precipitate the end times.)  Another settler, David Fogel, rescues the two women.  Tess, Eugie and Fogel are then snatched by 'Adel, a group of left-wing Palestinians and anti-Zionist Israeli and American Jews.

The recently recovered Yossi, Tess’s fiancé, turns out to be a member of this group and to have mobilized 'Adel to rescue Eugie and Tess.  When the Israeli military storms their hideout, Eugie sa

Kathleen Kern has worked as a human rights advocate with Christian Peacemaker Teams (CPT) since 1993, serving on assignments in Haiti, Washington, DC, Hebron, West Bank, Chiapas, Mexico, South Dakota and Colombia. She has authored two nonfiction books and her essays have appeared in Tikkun magazine and The Baltimore Sun. Her chapter describing the work of CPT, “From Haiti to Hebron with a Brief Stop in Washington, DC,” appeared in From the Ground Up: Mennonite Contributions to International Peacebuilding. Oxford University Press, 2000.