A Novel About Chemistry 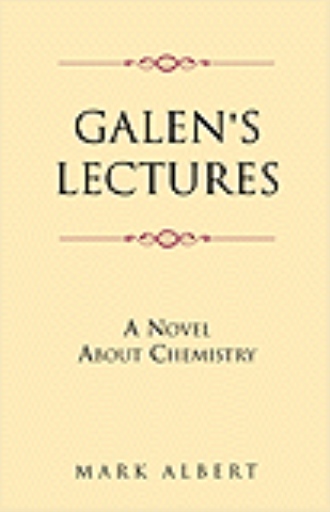 
"It is challenging to combine a novel with ´lectures´ and Albert does so ingeniously in
GALEN´S LECTURES. It is certainly very readable."

-- Oliver Sacks, M.D., Author of Awakenings,
The Man Who Mistook His Wife for a Hat
and Uncle Tungsten.

"A well crafted story for those with an interest in chemistry. A unique and recommended narrative."


"A compelling story. I really enjoyed it very much."


"I enjoyed the suspense, right from the beginning."


"Galen´s Lectures is one of those books that grabs your attention in the first line and doesn´t let go until the last. Doctor Galen is an honorable man just trying to get through his day like the rest of us. What appealed to me was his compassion for others and his love of teaching. I was enarmored of him from my first encounter and cheered for him every second afterward. When the story was over, not only did I have a better understanding of chemistry, but I was really glad I got to know Mason Galen. This is one of those rare novels that you can read again and again and again."

Chemist Mason Galen has returned to the chemistry department of his Alma Mater to rebuild his shattered life. But as he begins to find solace in his chemistry lectures and old and new friends, his refuge begins to collapse. A popular and inspiring chemistry professor vanishes, another falls victim to suicide while Galen´s most trusted mentor begins an astonishing physical decline. And of course there is Grenger. What will Galen make of Alto Grenger, a new administrator? Will Galen assemble and solve the pieces of this workplace mystery in time, or will he be forced to choose between his passion for science and self-preservation?

If you are nervous about having to learn chemistry and enjoy reading novels, I wrote GALEN´S LECTURES for you. It is a novel that describes the basic topics of chemistry within the emotional context of the people, places and stories that surround the field.

I have always found the study of chemistry to be enormously satisifying and always wondered why so many students fear it or hate it. I realized that part of the problem were the textbooks, densely packed with all the information that a chemist would ever want, but with so much more than a non-chemist would ever need. Few textbooks make any attempt at all to place the study of chemistry within the bounds of "real life", something that might entice a non-chemist to begin reading and then to read on.

Mark Albert is a Ph.D. chemist with 22 scientific publications and a successful scientific book. His long held desire to communicate chemistry to the non-scientist resulted in his independent novel GALEN'S LECTURES, a book that weaves chemistry lectures into a compelling story of workplace conflict.