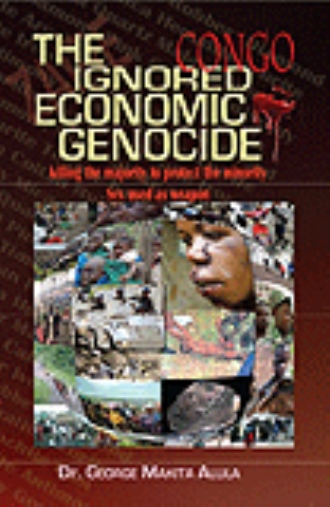 The ongoing ‘economic genocide’ in Congo leads to six millions people deaths in ten years. The world silent over the Congolese Genocide is beyond belief. These mass killings perpetrated to access the country’s natural resources. Rwanda and Uganda are backing rebels groups to secure illegal production of Timbers, diamonds, gold, Coltan (used in High-Tech industries). Civilians are killed on daily base despite the presence of the largest UN peaces keeping force. It’s time to end this genocide and bring warlords to justice for crimes against humanity. The country requires new leadership to build a direct supply chain to the international market. In this book “Congo, The Ignored Economic genocide”, the author try to show that so many life lost does not really worth it. The book start by simply assuming that nobody chooses his parents and the DNA finding showing that we all are in a brotherhood in this earth. Nobody live more than 150 years and we all are going to die. So why killing God’s people when he is the one who has the sole power to decide when and how each one will die: Natural catastrophes, diseases, accidents…

People of Congo have suffered the slavery system and two genocides based on economic reasons. Leopold II the Belgian King ruled the Congo Free State (1885-1908) for rubber, copper and diamonds exploitation. This exploitation was conducted with an despicable atrocity on the natives population. 10 millions people lost their lives and so many survived with hand severed. Congo went through 32 years of dictatorship through the President Mobutu Sese Seko – US friend and cold war partner.

To end with this dictatorship, United States backed a rebellion war that will bring Laurent Desire Kabila to power by using military force from Uganda, Burundi and Rwanda. Eastern Congo’s neighboring countries in 1997. In June 1998, the alliance that brought Desire Kabila to power broke. Congo’s president decided to return foreigner combatant back home. On August 2, 1998 Rwanda and Uganda decided to invades the Congo and occupy the Eastern region rich in mineral and natural resources: Diamonds, gold, coltan, timbers… Successive rebellions’ wars cost live to 6 millions of Congolese in ten years - as much as the Jewish people paid during the World War II with Adolph Hitler and the NAZI system. This 2nd Congolese genocide is happening in a deafening silence despite the largest UN peacekeeping force of MONUC with 17,000 people. The world lacks the courage to condemn, yesterday victims (Tutsis) who became also ‘genocidaires’ of their neighboring country the DRC. Congolese women are raped in a level never reach in the human history. Sex is used as weapons.

To provide its minerals in the international market to the Congo’s clients, The International community doesn’t need to team up with population killers. DRC was disorganized with the way Mobutu’s dictatorship ended in confusion. New generation has come with a new leadership that may secure the supply of Congo’s natural resources in line with the international standard defined by the Organization Economic Development of Commerce (OECD).

This book tends to show how an economic disaster created by this genocide is taking massive lives of the Congolese people. Justice is sought to bring peace in the African Great Lake region. This book is structured in the following way:

Chapter1: LIFE AS VALUE We All are borne to live, love and die - The author start by showing us that nobody chose his parents, family, skin color or country. DNA progress has shown that we are in a brotherhood in this earth. Because of permanent treat of "terrorism" and world instability and permanent wars, the Author suggests a large 'World Brain storming summit’ as the one who gather all chief of state of the world in New York each year. He also recalls the US leadership in the world that have stopped World War II, Kuwait invasion, Kosovo Muslim community's genocide - alone or by all