Dancing on the Off Beat 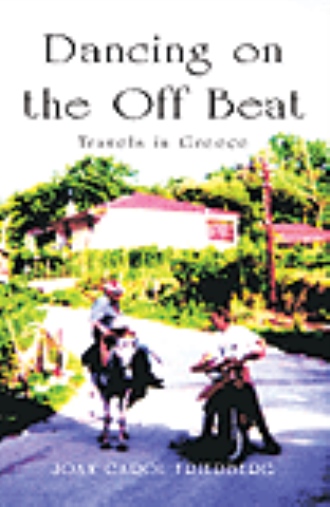 The Greece of fun-loving waiters, sun-drenched beaches, the breaking of plates, and big fat weddings only scratches the surface of the real Greece. In this account of a woman traveling solo throughout the Greek mainland, Joan Carol Friedberg uncovers a glimpse into the tragic history of modern Greece as it is reflected in the music, and she provides a context for understanding Greece’s compelling and unique musical expressions.

In 1982, the author spent three months traveling in the Balkans, through Yugoslavia, Bulgaria, Greece, and Turkey. Drawn to Greece’s traditional music and dances, she returned to Greece in 1993. During several subsequent trips, as a foreigner in search of Greece’s village music and dance traditions, she shares her observations with humor, clarity, insight and wisdom.

Though many books have been written about Greece, few foreigners have uncovered the more unusual aspects of this ancient land. Like Patrick Leigh Fermor’s Roumeli, Joan Carol Friedberg takes the reader along as she discovers Greece’s back roads and hidden folkways. She found the old tradition of offering hospitality to strangers still survives, as she was welcomed like a long-lost relative in rural villages and offered food and drink. She has delved deep into modern Greek history to find the wellspring behind the inherent melancholy that often pervades Greek folk music.

• In a village hidden in the hills outside of the legendary Thebes, older men recall and sing a song in the 14th Century dialect of their Albanian ancestors.

• In a high mountain village in Epirus, in search of a festival of nomads, the author is offered hospitality in the Greek tradition.

• At a concert of polyphonic music, in a village near the Albanian border, the voices produce animal-like howls, odd harmonies and unusual intervals in these rarely heard musical expressions.

• In a visit to a village high in the mountains of Epirus, the author discovers dances apparently unchanged from the way they were danced prior to World War II.

• In the rural Greek countryside west of Thessaloniki, tobacco leaves hang in the sun to dry and chickens scratch in the dirt, giving no clue as to the treasures hidden beneath, as the author leads us on a visit to the ancient tomb of Philip.

In Dancing on the Off Beat - Travels in Greece, Joan Carol Friedberg’s education as a journalist and more than 30 years as a working writer serve her well as she segues from her own adventures to the compelling true story of a young girl caught in the crossfire during Greece’s Civil War.

In a remote village high in the mountains of Epirus, the author was the guest of a man and woman who had fought in the Greek Civil War of 1946-49, and she subsequently interviewed one of two sisters from the family that, as a result of the Civil War, was dispersed from their small village to the far corners of Eastern Europe, one eventually settling in Budapest, Hungary, the other in Tashkent, Uzbekistan.

Joan Carol Friedberg’s imagination takes the reader from listening to a middle-aged, Greek woman’s narrative to experiencing the war from the mind’s eye of that same woman as a young child, who served as a messenger between the villagers and the guerillas hiding out in mountain forests.

Dancing on the Off Beat also probes thematically into the deeper issue of our rootedness in a place, its culture and traditions. As the author, an American, traverses the Greek mainland in search of traditional village music and dance, what she discovers again and again is that historical events have continually uprooted people. Her quest for tradition confronts the reality that, even in an ancient land, the villager has become what writer Pico Iyer calls "the global soul."

In the meantime, as the author began to question why her se

Joan Carol Friedberg is a graduate of the School of Journalism at Southern Illinois University. Her work has appeared in the Los Angeles Times, L.A. Weekly, and In These Times. Also a musician, singer, and dancer, she has traveled independently six times to remote, rural areas of Greece in search of its rich music and dance traditions. In 1995 and 1996, she served as contributing editor of The International Greek Folklore Society's Laografia. Her research has twice been published in Greece in the Proceedings of the International Organization for Folk Arts (I.O.F.A.) – UNESCO, in 1997 and 2000. She lives in Topanga, California.