Dreams On My Pillow 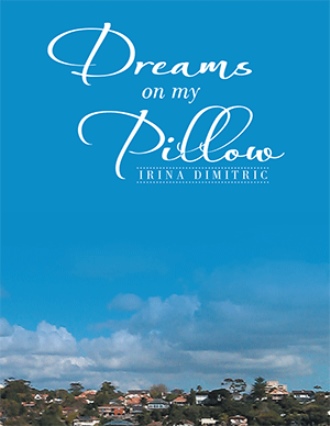 In this collection, her first, Irina Dimitric ponders over her journey through life, from childhood in her wartime homeland to migrating to Australia in 1964. Her poems reveal her dreams and disappointments, joy and pain, the value of forgiveness and gratitude, her love of nature and her love of laughter without which, she maintains, life would be unbearable. Writing poetry and photography, her pastimes born at the time she cared for her aging mother, help her to make sense of the world and to go on loving life. She loves both free verse and form poetry, the latter learnt from her mentor Susan Budig at Mindful Poetry on Gather.com, who also baptised Irina's creation of a new form of tercet–tercetonine, consisting of 3 lines: the first two lines rhyme; the third line contains a leonine or internal rhyme. See Holden Barina (p. 40)
Encouraged by Susan to submit her poems for publication, this poem is among her poems published online and in print by Narrator Australia Volume Two. Another two tercetonines appear in this collection: Just an Ordinary Garden (p. 8) and Cloud Gazing (p. 32), the latter published by Narrator Australia Volume Three.
Of all the forms set out as challenges by Susan Budig, chant royal was the most difficult one. Susan assured her students that if they succeeded in mastering it, they would positively glow. Irina says she still glows whenever she reads The Ploughing of Marko Kralyevich with a Twist (p. 36). Prince Marko and his horse Sarac (pronounced Shahratz, meaning piebald) were her favourite characters when as a child, sitting on her father's lap, she listened to him reading the poems about the Serbian battles against the Ottoman Turks.
The title of the book is the title of the poem on page 28, written as a response to the challenge on Gather.com: write a poem about winter, but in warm Sydney she could only dream about winter. Her connection with her homeland and Europe is very strong in her memory and in her heart.
The photographs which accompany some of the poems were all taken between 2011 and 2014 except for the following three photos: Irina with her mother on p. 18 sent to her father, who was in a POW camp in Germany; Irina's father on p. 19 during the Anzac March in Sydney in 1989; Irina with her friend Nada on p. 38, who also appears as Nelly with her brother Joe in the poem The Silver Stream (p. 29), remembering their happy childhood.
She has found online an outlet for her creative expression and is grateful for the friendships she has formed in cyberspace and all the good things in this life on earth. The book ends aptly with Prayers of Gratitude.
Irina's work can be seen on her blog Irina's Poetry Corner http://irinadim.com
Facebook https://www.facebook.com/irina.dimitricstojic
Twitter https://twitter.com/kookadim