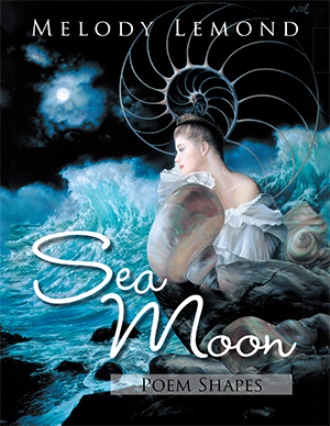 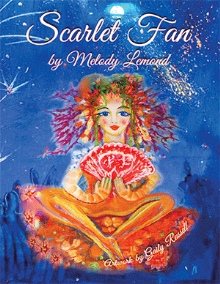 The feeling of mounting anticipation as one steps onto to the stage to dance is indescribable. All mundane concepts and concerns are left behind for a brief, timeless spell to simply express and share all the joy and wonder availed to us beyond the veil of the material world. It had never occurred to me that the written word could also have a similar effect. Aside from several love poems and channeled writings, I had not, until fairly recently, been aware of the fact that the medium of writing may also be a springboard for sharing—where one’s thoughts, dreams, aspirations, and soul intentions can find a foothold in reality, not until I inadvertently stumbled upon a veritable community of poets on social media. To know that I could allow my thoughts to take shape in forms not traditionally acceptable was gratifying, to say the least. With the writing of each of these poem shapes in Sea Moon, I felt as though I had stepped, like the dancer at heart that I am, and perhaps we all are, into a welcoming forum of word wielders. It’s not without the support of other poets, therefore, that I’m propelled here to embrace my direction, one whose ultimate goal is to touch people on as wide a scale as possible by simply conveying ideas that might strike melodious chords. I speak my truth here in the knowledge that many of the like-minded will welcome my organically honed word shapes (call it poetry or not) and resonate with them. I believe in the transformative power of all forms of art. If writing be an art form, then let us step lightly into this sanctioned art space, as both writer and reader (as “performer” and “audience”) and, respecting fully its ever-changing boundaries, allow the symbolism—“the beauty of words,” as M. Marceau put it—to penetrate our receptive orbs and have their essence filter through and transform our whole beings. It is with a deep-seated desire to touch and to share that I offer you my words, as structured here, in the hope that even a single resonate note will be struck, perhaps to reverberate. Beyond hope, I trust, and know, that we are ready for fresh waves of color to wash over us—to cleanse, nourish, and transform us so that we might all actually be the dancers at heart that we truly are. Enjoy!

Melody Lemond was born in Sydney, Australia, on October 2, 1950, into a large family—mostly of females. Her thirteen years spent in Catholic boarding schools were dark and stultifying, yet the clouds of suppression, repression, and oppression gradually dissipated as she emerged into womanhood and emancipation during the 1970s. Melody wasted no time making contacts with artists and sensitive people of like mind. During the earlier part of the 1970s, she took yoga and dance and drama workshops. Then, after buying a donkey named Abdul and sometimes riding it in whatever demonstrations might require her input at the time, she moved to the Northern Rivers area of New South Wales, where she traveled the bush regions with her sister, giving drama workshops for children in isolated towns—sometimes in local country halls and often outdoors—receiving some acclaim from local media. It was after a brief yet significant eye-to-eye encounter with an erect snake that Melody somehow knew that it was time to leave the bush for the city and to sell Abdul. This was a major decision, which required that she drop her well-laid plans of traveling around Australia with her sister (and donkey and cart) doing puppet shows. In the mid-1970s, Melody was drawn to the world of theater in Sydney, specifically to the genius of Lindsay Kemp (British) and his band of fine performers, then touring Australia. For a year, she traveled with his company—a magical year (understatement)—which primed her well for the advent, the following year, of Marcel Marceau, with whom she formed a close bond. The beauty and power of this significant relationship prompted Melody to enlist the aid of her guides to write a channeled book, utilizing the light of the then-pervading inspiration. These compilations comprised much wisdom and guidance (mostly in prose) that Melody sought to follow while performing her solo performance “Satin Dreamscapes,” a lyrical contemporary piece that played in the major cities in Australia as well as in United States for a brief season in 1980. On her return from the United States, Melody compiled her earlier channelings—held during the rise of the moon for a year after Marceau’s midseventies tour—into what was entitled “Crystal Fragments.” During Marceau’s next tour to Australia in 1982, he corrected, at one of their meetings, the French conversations strewn throughout its pages. These limited edition printouts were distributed among friends. During the early eighties, Melody, continuing her writing and reading, assisted unemployed artists of all mediums to access government grants for group projects, as promised by the prime minister of the time, yet to little avail. In 1984, Melody gave birth to a son, now a scientist and avid surfer, and in 1987 to a daughter, now a trained and talented dancer. She is presently living in Byron Bay, close to the sea and to like-minded people. As with her now-grown children, she is riding the waves with anticipation and readiness. Contact the author at melodylemond@gmail.com and www.poemshapes.com.