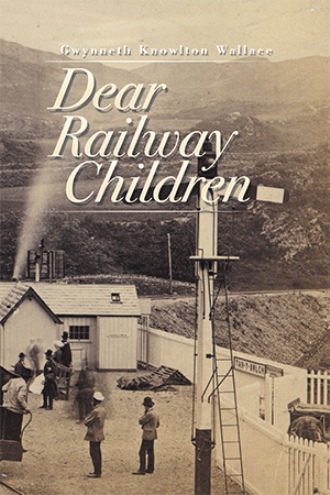 Gwynneth Wallace’s childhood was shaped by two interesting influences. Her childhood home was a small town on the western Canadian prairie. Danish farmers had founded a town in which the minister and the church were shaping, and Danish was the first language for most. The close-knit community enjoyed the beauty of the surrounding prairie wheat fields in summer and winter sports in cold weather. The second influence was the fact that her father was the railway station agent, and Gwynneth grew up in the station house. In her adult life, she wrote letters for her children, who had scattered, and also to her grandchildren, nieces, and nephews, as she recalled all the fascinating things that went on in a railway station. She called the letters her “Dear Railway Children” and shared with her young readers the adventures of her early life. Late she gathered copies of the many letters and had them printed as a book for children fascinated with her story.

Gwynneth Joyce (Knowlton) Wallace was born in Calgary in 1929, to Ted and Faye Knowlton. She grew up in Standard, Alta, attended Mount Royal College in Calgary and received a degree in Nursing from UBC, Vancouver. Her graduation day was the day of her wedding rehearsal and the following day she married Robert Wallace, a theological student from Armstrong BC. Together they served United churches in Abbey Saskatchewan, Lake Cowichan BC, calgary, Montreal and Toronto and after retiring to Nova Scotia, a number· of congregations in the Annapolis Valley. They raised five children, Dolly Lansdowne, Bella Bella BC, Brenda Wallace-Allen, Blomidon, Craig, Edmonton, Scott (TJ Scott), and Mark, Los Angeles. Gwynneth became a vital presence in the lives of her children's partners, her much loved grandchildren and her adored great grandchildren. She also had an enduring impact on extended family, "almost family" and a worldwide circle of friends. Gwynneth was an innovator and leader in Public Health throughout her career, at one point representing WHO as an intercontinental traveling planner in Heart Health. She was a· recognized leader in every community in which she resided always seeking_ out opportunities to cultivate an interest in the arts, most recently founding the popular Grow with Art program at NSCC Kingstec. Gwynneth was a great observer of life which she documented through photos and journaling. This observation of detail is reflected in a number of books she wrote or cowrote. She lived with cancer for 30 years before finally quietly "slipping the surly bonds of earth" June 28th at home in the presence of family. We will gather to remember her as a mentor, host, educator, advisor, leader and nurturer of dreams at a memorial service to be held on July 21st at 2:00 at St. Andrew's United Church, Wolfville. Gwynneth would have appreciated donations to the Valley Hospice Foundation or Grow with Art. Arrangements have been entrusted to the White Family Funeral Home and Cremation Services, Kentville.