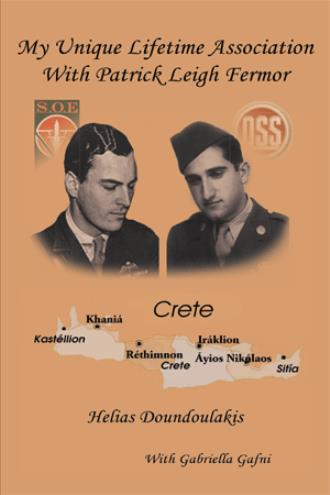 Although many accounts have been written about Patrick Leigh Fermor, the great travel writer, prose poet, adventurer and Renaissance man, few are more deeply personal and direct than this narrative by Helias Doundoulakis, author of I Was Trained To Be a Spy, Books I & II. The German presence was still everywhere on the island of Crete in July, 1942 when Helias, a nineteen-year-old member of his brother George’s famed resistance movement, went to the bus station in Chania Porte to greet Patrick Leigh Fermor (then known to the Greeks by his code name, “Mihalis”), who was scheduled to replace Captain Thomas Dunbabin of the Special Operations Executive (the “SOE”), the British equivalent of the United States Office of Strategic Services (the “OSS”), formed to assist local resistance movements fighting against the Axis powers. Filled with a spirit of adventure, young Helias hardly knew what to expect of the new captain, and was stunned when he encountered the charismatic Leigh Fermor, whose carefree - often dangerous - approach to life excited and intrigued the boy. What followed was a unique lifetime friendship that surpassed both men’s expectations. Now, in his golden years, the author pays tribute to his memories of Leigh Fermor, and commemorates a time long gone, but never forgotten. Read this compelling account, and get to know two very remarkable figures and the heroes that supported the cause of freedom.

Helias Doundoulakis was born in 1923 in Canton, Ohio, to Greek immigrant parents, grew up in Archanes, Greece, and returned to America in 1946 after he served in the United States Army and the OSS during WWII.

At the age of two, he and his family immigrated to Crete, Greece, and there they lived uneventfully until German paratroopers invaded the island in May of 1941. After a two-year involvement with the Cretan resistance and the British SOE, he was evacuated by the SOE to Cairo, Egypt. He enlisted in the United States Army and was recruited into the fledgling American spy service, the OSS. There, as a novice, he was schooled in the SI of the OSS, or Secret Intelligence branch, and became adroit in the use of the wireless and other techniques so that he was sent back to Salonica, Greece, the main disembarkation point for German troop movements. There, along with a team comprised of a Greek naval intelligence officer, daily messages were sent to OSS Headquarters in Cairo. With this information, detailed German troop locations were monitored, including maritime activities in the port of Salonica. At the war's conclusion, he was decorated by the United States Army and the Greek government.

His first book, I Was Trained To Be A Spy, chronicles his journey from small-town boy to spy. This book was so well received, that he undertook a second book in the same series, followed by a third book in collaboration with Gabriella Gafni, Trained To Be An OSS Spy. He was nominated for the prestigious Ellis Island Family Heritage Award in 1996. As a civil engineer for Grumman Aerospace Corporation, he worked on the Apollo Space missions, the F-14 fighter jet, and the Space Shuttle. His patent for the largest radio telescope in the world was used for the construction of the "Arecibo Antenna" in Puerto Rico, used in the design for the largest antenna of its kind at the NAIC Arecibo Observatory. He lives with his wife, Rita, in New York, and has four children and eight grandchildren.