The Handbook of Small Business 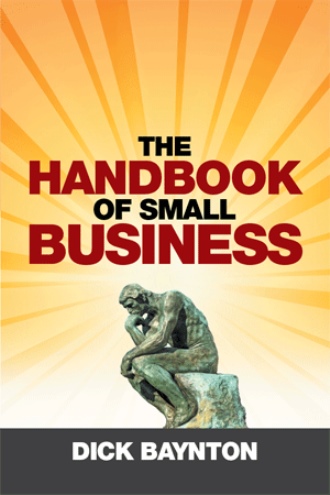 This ‘Handbook of Small Business’ includes ninety chapters of compass points that direct entrepreneurs to improve their chances of success as business owners and operators. Whether a reader has been operating an enterprise for many years or is just thinking of crossing the threshold of business ownership, this book will help reduce risk and direct routing around hazards that obstruct successful operation. The book is not meant to be a tome to be read and retired, but an action manual of ideas and guidelines. Great value will be gained by readers that keep ‘The Handbook of Small Business’ handy at all times and in all situations. Dedicated leaders that read the guidelines presented throughout the pages of this book will be rewarded by reminders and concepts that offer alternatives to humdrum management theories and principles. The information presented is timeless in nature and urgent in utilization. The author’s experience, education and business acumen intersect to provide help that has probably never before been presented in such a dynamic and condensed form. Men and women in businesses large and small can absorb and utilize ideas from this seminal manual. Operating an enterprise in the fast-moving environment of today’s topsy-turvy economy is challenging. Reading and utilizing the theories and practices bullet-pointed in this book will be rewarded with the euphoria of genuine success.

Dick was born in rural Oakland County, Michigan, and has lived in nine states, including his native Michigan. After graduation from Lake Orion High School, he entered Michigan State University, where studies were interrupted by service in the US Navy. Upon completing his studies with a BS degree, he worked in cabinet making and home construction with his father. Joining a prefabricated home builder in Dearborn, he was transferred to a branch factory in Port Jervis, New York. Leaving that company, he formed a home-building company in the area. Although the business was a successful operation, he joined the Federal Housing Administration and moved to Casper, Wyoming. After serving as cost examiner for the Pacific region in Honolulu, Hawaii, and chief architect in the Casper office, Dick joined a timber and building products firm in Minneapolis where he advanced to middle management. The company was acquired by an international firm where he progressed through several positions, becoming a division sales and marketing manager. Ready to test his mettle, Dick, with his late wife Elaine, formed a company in Virginia and sold the successful distributorship and countertop fabricator to a British firm. Retiring for three weeks, Dick became a business broker, earned an MBA at Radford University, and has since been deeply engaged in business consulting. Dick, daughter Penny, and sons Jim and Randy and their families live in Virginia.