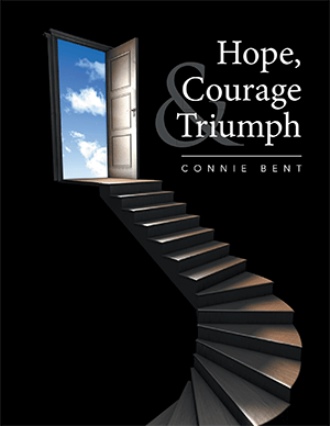 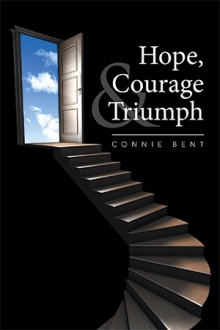 Hope, Courage & Triumph is the story about one young widow’s journey through adventures and madness. Determination and love were the key elements of her being as she struggled to face the demons of the illness of her husband, Jerry. Tragedy was no stranger to her. No one knew what horrors lay behind the closed doors of her life, yet hope drove her on.

One evening, after work, Jerry held her in his arm, confessing his love to her. Suddenly, a glaze covers his eyes, and a look of hatred crosses his face. Looking at her, he began talking weird about things she knew nothing of. He said, “I’ve heard that before. You know what I’m talking about.” She couldn’t move. The glaze left his face as suddenly as it came, and moving toward her, he said, “I love you more than life itself.” Hope drove her as she struggled to pull him out of the pits of hell.

An earlier marriage between two teenagers is also addressed in Hope, Courage & Triumph. One day, after I said, “I love you,” he squeezed my hand, opened his eyes, and looked directly at me. There was no more joy, for hope and courage were lost, and there was not triumph.

Connie Bent was born in Brookfield, Missouri, in 1941. She has been a very determined person from the moment she was born. If she wanted something, she went after it. Bent grew up in a small town in Missouri and married at the age of sixteen. She quit school before her senior year, but knowing education was vital, she wanted to graduate. During that time, mothers were not allowed to return to school. Bent, being the tenacious person she was, convinced the school board to allow her to come back to school and graduate, becoming the first mother to graduate from her school. Bent knows tragedy well, for she became a widow at the age of twenty-five years old. She is a mother of three children.

Bent earned her master’s degree in clinical social work from Kansas University. She completed a family therapy externship at the Menninger Foundation in Topeka, Kansas. Bent spent the next thirty years employed in a community mental health center, providing therapy for people who suffered from mental illness. She specialized in providing family therapy and play therapy, which she felt were important to families who were dealing with a mental illness.