The First Book of the Adult Trilogy 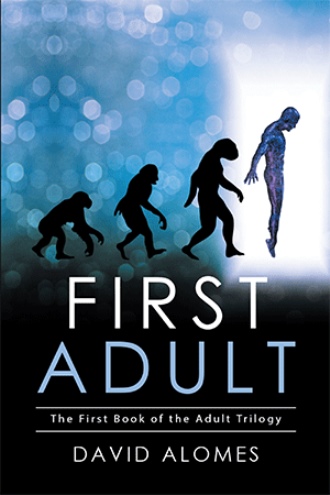 He finally arrived at the bridge and stood in the doorway, mouth agape. The room was full of workstations and people, but that was not what had him captivated. In the middle of the room was a floating picture of the moon in all its glory. Samuel's statue-like stance and wide eyes brought smiles to everyone in the room - many had had that first reaction themselves. With a quick shake of his head and a few rapid blinks, he tore his gaze away and looked around the bridge. An older looking person was indicating a seat next to his and clearly extending an invitation. With only a small hesitation, he walked across the room and sat down. Immediately, the seat began to move underneath him, changing its shape into a very comfortable cushion. Samuel smiled and relaxed into the comfortable chair. Out of thin air, Ikara appeared in the chair on the other side of the older person, who Samuel had correctly guessed to be the captain of the ship. “Well, Samuel of Earth, what do you think of our little ship?” Ikara asked. Samuel nodded and smiled, “While I have never even seen a spaceship before, I cannot imagine a better one! On Earth, you can always tell new technology, as it's always bulky or clunky,” he said, waving his hand in the air. “It's only after many years that functionality and aesthetics combine and you achieve such simple but beautiful lines.” Casting a glance around the bridge, he continued to shake his head, “I cannot even guess how many years - no, centuries! it would have taken to get to this point!” Ikara bobbled his head in the now familiar nod. “Yes, it is true that simplicity and functionality are hard to reconcile.” Then he turned slightly to his left. “Captain, why don't you show our guest where we are?” With a sharp nod of his head, the captain barked some instructions and the view in the middle of the room changed. Now Earth was behind the moon, half of it in darkness, overshadowing the moon like a big brooding uncle. The sunlit side of Earth was very clear and he had no doubt that what he was seeing was outside of the ship. Ikara pointed to a small red flashing dot on the screen “That is us,” he smiled. Samuel stared at the picture for a moment. Then he tilted his head slightly and asked, “Are we hiding behind the moon?” Ikara's face hardened a little and he said quietly, “Yes.” Samuel blinked at the dot on the screen and then refocused on the bridge. A new understanding leaped into his mind. Everyone was at their posts, alert and ready. There was no comfort in their postures. They were the ones at risk, they were the civilised people dropping by to visit the uneducated peoples of a violent world. Samuel stood up from his seat, his back straight, his jaw clenched and his hands in tight fists by his side. He looked intently at his world, as the area of sunlit surface slowly expanded with the coming dawn. Earth hung in space, gyrating slowly. A huge weather pattern covered the upper left face of the sunlit side of the planet, an area which would have been suffering from the storm, but from this distance, it just looked peaceful and beautiful. For a second, he was lost in the vision before him. His jaw relaxed and his fists started to unclench. With a small start, he shook his head. He knew what he was watching was the lie, a dream. He knew the terrible events that unfolded minute by minute upon that spinning globe that was Earth. Death and violence raged across Earth. He took a ragged breath and bunched his fists. “All day, every day, people die a nasty and violent death on my world. We accept it because - well, what can you do? Hunger, disease, war - and the powerful do nothing but feed upon the misery and death of others.” Samuel paused and blinked a few times, his fists relaxing and the tension draining out of him. “We have a saying on Earth - `What can anyone do?'” He turned back to look at Ikara, and put his open hand on his chest. “But I understand now. It's no longer `what can anyone do', is it? It's what can I do?” Ikara looked at him intently for a moment and then smiled, giving a small sad nod. Samuel turned back to look at the spinning globe again. “Everyone that I hold most dear is on that blue ball. My wife and children, family and friends. I would protect them with my life - but that is not enough. It is not enough! There has to be a better way!” He stood still a few moments, taking in the vista before him. Then, turning back to Ikara, he blinked away the moisture from his eyes, took a deep breath and cleared his throat. “If you are happy to train me, I want to learn.” Ikara looked at him and said with conviction, “You are now ready.” Without turning, he raised his voice. “Captain, take us home!” Within minutes, the scene had changed in the view area to one of resplendent colours as the ship slid into between-space, mesmerising Samuel.

In a technologically advanced galaxy torn apart by war and strife, powerful beings known as Adults command enormous respect. On his world, Ikara is the ‘First’, the title given to the most powerful Adult on a planet. His mission is to track down and train gifted beings from other worlds in an ambitious attempt to civilise the Galaxy. After many disenchanted journeys to war-torn planet Earth to identify a suitable candidate, Ikara finally discovers enormous potential in Samuel, a small-town lawyer. He transports Samuel to the spaceship at his disposal for this mission and begins Samuel’s training to become an Adult. The training is simple. Ikara will just give Samuel a story, and in the giving, all will be revealed. But this is no simple tale told from one being to another. This story will be mind transferred, a process with all the punch of reality, and Samuel will have to live through the story as though he was in it. The story is of Doneel, the founder of the Adult movement, who lived on a world that had been torn apart by a war lasting a thousand years. His is a time of extreme violence, where death is in every corner. If Samuel can survive the story, he will become the most powerful human in history. If he does not, he will be dead.

David Alomes was born in a small mining town in regional Australia. His father, a highly decorated police officer, instilled a strong centre of right and wrong in him from an early age. Having found his much-loved wife, he was married with three children before he knew it. Playing to his strengths, he undertook years of study as an accountant, becoming a certified public accountant in 1988, and then followed this up with financial planning qualifications. David practises as a public accountant almost thirty years later with his son in partnership. Discussing the world’s ills one day with his daughter, he found a strong voice for changing how things should be and decided to turn his hand to words as well. Using his analytical skills to seek initial support, he undertook writing courses and was personally coached by editors and fellow writers. His first book, Growing Up, received praise from readers and agents alike. David is optimistic about the future in spite of all the world’s ills. He believes that, somehow, we will find a way to overcome the obstacles we face as a species and achieve harmony —but everything that is worthwhile is a struggle to achieve.