Jesus Returns and Faces Moses as Aaron and Paul Arrive

A Long-Overdue Friendly Dialogue between Christians and Jews 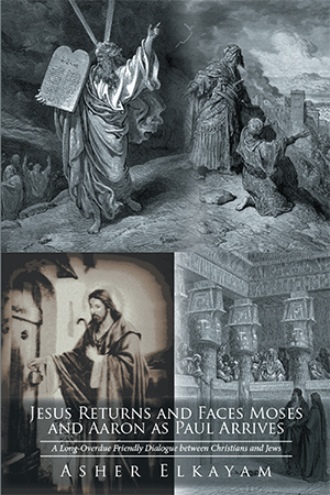 This is a fiction book about biblical icons who 'come back' to earth in order to listen to and judge their supporters. Jesus comes back and faces Moses and Aaron. For Christians, Jesus is the symbol of purity and deity. For Jews, Moses is the prophet who produced the laws for all humanity. Moses is considered in the book of Genesis to be the humblest of all men. While Moses, Jesus, Paul and Aaron are having a serious talk, a heated debate is taking place here on earth among bible lovers and objective scholars. Community leaders organize conferences in several towns around the country and invite spiritual leaders, scientists and anthropologists to discuss the concept of Creation versus Evolution.

In the fictive world of our biblical icons, more and more historic figures appear and join the circle of discussion and debate about the original biblical laws and how some laws have been changed throughout history. It is being exciting.

Back on earth, a friendly but frank dialogue on the Judeo-Christian relations takes place. Rabbis, men of church and scientists vent their opinions about the sour and happy moments, which took place during the last 2000 years, between Jews and Christians. Efforts are made between both parties to clear several myths, which separated the two camps throughout history.

While the above is taking place, Moses, Jesus and others are invisible to the audience.

The readers of this project are lead to realize that, after a painful and a historic confrontation between our biblical icons, a somewhat positive and constructive bridge has been formed. Their mutual understanding was based on the biblical commandments, which are accepted by both religions. Several doubts have been cleared.

The multiple conferences between humans ended up establishing a long list of findings, thus enabling a constructive rapprochement between both religions. It was concluded that, despite some differences, both religions could live comfortably with each other within mutual respect and mutual tolerance.

Israeli bestseller Dr Adam Ackerman, commenting on Mr. Elkayam's work on the Bible, said among other things that Mr. Elkayam '... shows deep knowledge of the Bible, the New Testament and the Qur'An. His books promote the tolerant people of all faiths and strengthen the belief to advance together to real peace in the world. His books should ...be translated into many languages.'