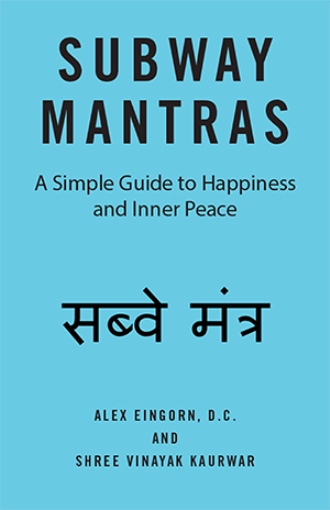 Subway Mantras is a short book of practical mantras that can be used every day of the week. Mantras are cogwheels of universal engines and have been practiced around the world for thousands of years, and when used properly, will help anyone achieve anything that is desired

Dr. Alex Eingorn founded one of NYC’s first multi-disciplinary healthcare practices in 1989, where he uses a balance of traditional and state-of-the-art chiropractic techniques to help patients regain and maintain their health and vitality. In 2002 he met Dr. Madan Kataria, became a Laughter Yoga Leader, and has been leading and hosting weekly Laughter Yoga sessions since. In 2004 he met Shree Vinayak, which started his journey into more traditional Yoga studies. Inspired by the magical singing of Russil Paul, he decided to study Mantras in greater depth. In 2010 he became the Laughter Yoga Ambassador to the UN. This has lead to interviews on NBC’s Today Show, ABC’s Good Morning America, CBS, Good Morning Japan, and other international television networks. In 2014 he finally completed a 500-hour certification in Advaita Yoga (Yoga of Non Duality). Alex has been studying and practicing Mantra to overcome many personal and professional issues, such as PTSD, financial crisis, rearing children, and many more challenges, which has led to the creation of this book. Vinayak Kaurwar, also known as “Shree” to friends and clients, has studied with several masters in the light of Sanskrit scriptures of Yoga and Ayurveda. Born in Nagpur, India, Shree has been practicing yoga since the age of five. His spiritual journey has brought him as a disciple to several spiritual masters, one of whom lives deep in Tadoba National Park in the holy forest of Ramdegi. Additionally, he has been conducting research on longevity for the past 22 years with Himalayan yogis and masters, and as part of this inquiry, he meditates and practices yoga 4 to 6 hours a day. Teaching both groups and individuals in NYC since 1996, Shree currently offers workshops on how to decrease stress levels through the practice of the Eight Limbs of Yoga, as well as Panchakarma healing workshops to add healthy, productive years to people’s lives. He also teaches Sanskrit texts to individuals and groups, including Dr. Eingorn.