Beyond Good & Evil: The Galanor Saga Volume I

A Novel In Three Parts 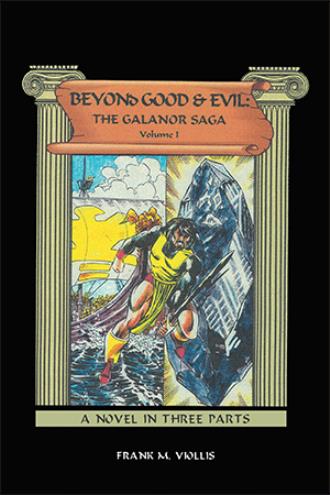 Each book is a freestanding work that relies on the others but can be read independently. In Book One, we find out that Galanor is the last in an ancient line of humanoids who had found their way to Earth thousands of years earlier. They were an exceptional race of creatures and established outposts in various parts of the primeval Earth. One of those places was Atlantis. Raised as an orphan by a man of extraordinary skill and wisdom, he amasses great wealth and prominence. The book opens with him standing at the site of his mentor’s funeral pyre, alone and forlorn. He vows revenge on the entity whose agents caused his friend’s death. As the book unfolds he finds out that he is not an orphan; that his father is the Atlantean High Priest and head of the ruling elite. There first meeting doesn’t go very well; but love and patience win out. Father and son are ultimately reconciled; but, not soon enough. Atlantis is doomed; and Galanor must watch as his new found father, is taken from him by the forces of nature and the demands of the universe. Book two finds Galanor at the helm of a might Atlantean warship: The Salafar. It opens with them docking in port city, in kingdom controlled by the most foul and corrupt of rulers. After taking decisive revenge for the brutal murder one of his most trusted and loyal comrades, he and his crew are pursued to an island where he engages the enemy fleet. During the heat of the battle he is approached by two corrupt and destructive forces: a wizard who promises him a prize of great value in exchange for his assistance; and the incarnation of the demon (Azool) whom he has vowed to destroy. Following the victorious outcome of the battle, the demon takes residence in his soul, sending him into a deep coma. His crew, under the sway of the wizard. Decide to sail to an island where, presumably, a great treasure resides. Galanor escapes Azool’s coma; rescues his crew; discovers the “treasure” is, in fact an ancient map, leading to an island at the top of the world; an island, the existence of which had been erased from human memory a thousand generations before; an island that is his ancestral home, and site of the city built and inhabited by those who first discovered this planet. Once there, he discovers a portal to a realm between realities. Book three, finds Galanor entering the portal and slipping into that interim realm. There, he meets the specters who are it’s sole inhabitants. They explain something of his lineage and of their plight. They want to ask for his help but feel it would mean his doom. He accepts the challenge, knowing full well that he will not survive. With that he passes into the next realm. It is a realm that exist as the sole creation and province of a mad god; and god he has sworn to kill. It is here that Galanor meets the woman the fates have created to be his life mate, Kara-Ma-Nea. She is a strong, skilled and dedicated warrior; a guardian of the borders of her homeland; and heir to an ancient lineage. She is also the most beautiful woman he has ever seen. Their loves develops and grows, as he is stricken blind while fighting bat-like creatures in her defense; and she risks everything to save him. In time, she takes him to the mountain retreat of the god whose will sustains her world. He climbs the mountain; encounters the god (whom he discovers is another of his ancestors);and slays him, only to discover that his soul had become a refuge for the the demon-god, Azool. During their exchange, Galanor learns many things about his true nature; things that are to unimaginative for him to accept. He slays Azool (or so he thinks), and discovers that a grey mist is sweeping over the world. It is destroying everything. In killing the god, who was the substance supporting this reality, he has doomed an entire universe, including Kara. He tries to save her, but can’t. He returns to his world a broken and self destructive man. He has to live with the fact that he was responsible for death on an unprecedented scale; and that he taken the life of the only woman he will ever love.

I was born in New York in 1948. Writing has been my passion, though never my vocation. I studied History, Philosophy and Religion in college. I was about to go off to do my graduate work in Medieval History, when I was confronted by the draft. I couldn’t see my taking another’s life, no matter what the justification; nor could I see myself turning my back of my responsibility as a member of this national community. So, I enlisted in the US Coast Guard. My test scores were higher than most, so I was asked if I would consider being trained for a new rating, one that had just been created. Of course, I agreed. I was then trained as Marine Science Technician. Our sole purpose, in those early days, was to gather data on the world’s oceans. Data that would be used to form a baseline for research into what was then being called, “global warming”. I really enjoyed that. Following my military duties, I married and proceeded to waste the next twenty five years as an insurance broker. I really hated that. During that period of my life, I was lucky enough to become the father of a wonder son, Jason. Galanor is the product of several stories I made up to entertain him. During this time I obtained my black belt in Tae-Kwon-Do and learned how to fence. As I could see my fiftieth year approaching, I decided it was time to get to work on something I wanted to do, and not something I had to do. I began writing the Galanor Saga. I tried for years to get a publisher or agent to accept my work. That didn’t work. So, I had to evaluate my options and design a new course of action. I decided to self publish. This was a big step, and required a lot of thought and faith. Eventually, I had to make a decision: either stay mired in my counterproductive and spiritually crippling life; or, roll life’s dice and fully surrender myself to my dream of being a novelist. I chose the later. I quit my job; cashed in all my IRA’s, thus removing my only financial safety net; and set out to design, market and sell my book. For the next two years this was my life. Unfortunately, I ran out of money. Despite the fact that I had received numerous rave reviews for my work (including the Science Fiction Book Club and on Amazon. Com); had sold nearly a thousand copies, worldwide; and had garnered the interest of a Hollywood producer; I just couldn’t go on. Reluctantly, I was for to abandoning my project. Years later, I approached your office to produce a digital copy of my novel. Which brings us to today... On a personal note, I have a wonderful son, Jason who is an Art Teacher. He is married and has three children, my beautiful and intelligent grandchildren: Michael, Logan and Rebecca. My interests (and the object of most of my outside reading) include Archeology, Anthropology, Astrophysics, and History (with an emphasis of the “Classic” world). I make my living, alongside my brother as a Personal Trainer. Having had three failed marriage, I prefer the more life affirming relationship I have had and continue to have with my retired racing greyhounds. My current companion is a young fellow named, Oberon. I’m a vegetarian, Taoist (I meditate three times a day) and exercise nut (putting in an average of two hours a day).