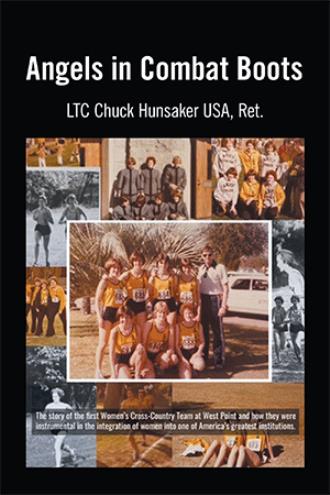 ANGELS IN COMBAT BOOTS – A SYNOPSIS In 1802 Thomas Jefferson signed the legislation that established the United States Military Academy at West Point. It was an all-male institution to train and educate officers for the United States Army. That all changed in 1973 when the 93rd Congress passed legislation that would ensure that admission to the service academies would be made without regard to a candidate’s sex, race, color, or religious beliefs.” Women were coming to West Point! They may be able to handle the academics, but they will never be able to handle the physical requirements echoed across the plain. Part of Day 1 processing is a pull-up test. Many of the women struggled, and “I told you so” became the thought of the day. However, when all new cadets were awakened the following morning and reported to physical training, upper-class cadets and tactical officers were shocked when a few of the women could run in the “fast” group. That simply couldn’t be…but it was. Running was the one area where both men and women participated shoulder to shoulder on a daily basis, and women with cross country experience could not only run with the average men, they could run with many of the better men. They were instrumental in breaking down those barriers and helping to fully integrate women into the Corps of Cadets. Women did belong…women could handle the physical requirements. In this book you will get to know that first women’s cross-country team. You will follow their athletic recruitment, their summer training at Corps Squad Screening, understand the challenges of being among the first women at the academy and see how they handled their first varsity meet. You will understand how they became known as “Charlie’s Angels”, watch them develop as runners who could initially only handle minimal mileage to the team that became Eastern Champions, finished in the nation’s top 10 twice, and even became the first Army women’s team to BEAT NAVY…a special stealth competition but a win none-the-less. They were special women and were truly…ANGELS IN COMBAT BOOTS!

Charles R. (Chuck) Hunsaker was born and raised in Lima, Ohio. He graduated from Capital University with a Bachelor’s degree majoring in Biology and minoring in Physical Education. He went on to receive a Master’s degree (Phi Kappa Phi) in Athletic Administration from the University of Cincinnati. He taught science and coached track in Lima, Ohio for two years and then became a physical education instructor and the assistant track and cross-country coach at the University of Cincinnati. After two years he became the head track and cross-country coach. During his time at Cincinnati he coached the university’s first All Americans in both sports as well as the first individual national champion. After two years as head coach, he moved to Southwest Missouri State University (now Missouri State) where he served as an instructor in the physical education department and head coach of track and cross country. During 6 ½ years at Southwest Missouri he won five conference cross country team titles; coached one NCAA championship team; coached two NCAA runner-up teams; coached 22 All Americans, and two individual national champions. In 1976 he was nominated to be the distance coach of the US Olympic team. He has served as Athletics (Track and Field) advisor to the island of Barbados, helped them develop the first ever college level physical education program in the West Indies, and worked with their national junior team. In 1977 he was called to active duty in the United States Army where he served for twenty-one years. One of his assignments was as a physical education instructor at the United States Military Academy where he started the women’s track and cross-country programs and served as their first coach. Three years later his teams were Eastern Champions in indoor track and cross country, finished in the top 10 nationally two times, had produced three All Americans, two individual national champions, and he was the first women’s coach to beat Navy. During his brief coaching career he was twice selected as the NCAA Division II National Cross country Coach of the Year, was selected four times as the NCAA District Cross country Coach of the year, once as NCAA District Outdoor Track Coach of the year, was selected as the Eastern Women’s Indoor Track and Cross country Coach of the Year, was selected an Outstanding Young Man in America, and served as President of the National Division II Cross country Coaches Association. During his 21-year Army career, he had assignments at West Point, Ft Benjamin Harrison, Panama, Ft Knox, Panama (back to back assignments with US Southern Command and US Army South) and Ft Benning. Following retirement from the United States Army, he worked as Military Aide and District Director for US Congressman Mac Collins, Assistant Business Unit Manager for the Omega Training Division of Cubic Corporation, the Governor of Georgia as the Defense/Space recruiter and Assistant Director of the Governor’s Defense Initiative. He currently owns his own company, Winged Foot Consulting. He is a member of the Shawnee High School Athletic Hall of Fame, the Shawnee High School Outstanding Graduate Hall of Fame, the Capital University Athletic Hall of Fame, the Missouri State University Athletic Hall of Fame, and both the States of Ohio and Missouri Track Coaching Association Halls of Fame. He and his team at Missouri State are also members of the MIAA conference hall of fame. He and his wife, Pat, have two daughters, Tracy and Jody, and three grandsons, Sebastian (a cadet at West Point), Xander, and Alex. They live in Cataula, Georgia. If you enjoyed this book you may also enjoy his first book, Providence, which is about building the team at Southwest Missouri State.