NICHOLAS THE NEW BOY IN SCHOOL 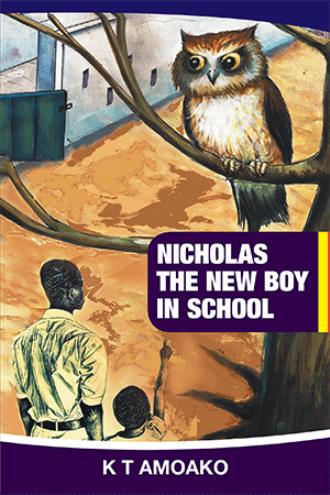 Nicholas wished the rain would never stop in the morning. And that would be quite good for both teachers and students to stay away from school. Students would like to play and eat at home. At least, that would also spare Nicholas one more day to complete his homework. The teeming rain unexpectedly stopped at few minutes to four o'clock at dawn. God did not listen to his prayer to let it rain unabatedly. The rain came along with chills which froze the fingers and toes. Cold winds penetrated into their house and filled their rooms. The windows in the house had not been fixed with louvre blades. Instead, plastic mesh was used for covering the windows to prevent insects which might enter the rooms. The brass monkey weather lured Nicholas into a deep slumber. Of course, he wouldn't like to be awoken at such times when the weather was comfortable for good sleep. He wrapped his rigid body with a dirty blanket and appeared like cocoon on the floor. If he had his own way, rainy days should be declared holidays for schools. It was a day after Monday and his mother Mrs. Marigold yelled at him to get up from sleep. She knew the weather was conducive for sleeping and if she permitted Nicholas to enjoy the sleep, he would be up at the time schools would go for the first recreation. Nicholas would rightly admit it was not his making to be late for school but would blame the rain which he had no control over it. His mother's yelling fell into his deaf ears and it was quite useless to flog a dead horse. His mother squatted beside him on the floor and shook him vigorously. He stretched out his hands and legs lazily on the floor. His restlessness during sleep had pushed him from the pillow and the mat he slept on to the bare floor. He was pretending to be asleep and thus making it tough for his mother to wake him up. However, his mother was bent on getting him up no matter how deep he had gone into sleeping and had been dreaming. She shook him again. Nicholas screwed up his face, squinted his eyes and quickly closed them. 'Nicholas, get up!' yelled his mother. 'Ah, who is disturbing my sleep?' asked Nicholas. His mother guessed he said it out in the mid of sleep and wakefulness. Mrs. Marigold shook him again and his temper went high. He squinted his eyes and looked outside through a window if the atmosphere was clear for the start of the day. There was darkness out there still, though the cock has crowed several times. He wondered why his mother wanted him up that very moment. Couldn't she postpone it? There was one thing which could fly his mother away from him. That pretty good smell! Flatulence popped out from his anus silently. In few seconds the flatulence smelling like rotten eggs permeated the blanket covering him and slowly the pretty good smell unfurled the room. His mother sneezed. 'Humph, what smell is this?' She asked herself. The flatulence choked her nostrils and she quickly switched on the ceiling fan. The fan worsened the situation. The wind from the fan evenly distributed the flatulence to the rest of the rooms and each room got a good share of it. Mrs. Marigold moved helter-skelter, finding a place to save her nose. She dashed to the kitchen and it smelled the same. Must she try the bathhouse for a breathing space? Over there, the nasty smell stared her in the face too. In the toilet, mosquitoes flew and whined as they were forced out by the flatulence. The worse thing in the bathhouse was that Nicholas had already left his bowels in the toilet without flushing it. The stench from the uncovered water-closet added salt to an injury. She ran and opened a door leading out the house. When he spied on his mother as she went about and tried to evade the ominous odour, he kicked his legs in the air on his mat. Besides this, there was no means Nicholas could tell his mother to stop getting on his nerves. He was happy to have driven away her mother by his farts. Mrs. Marigold had something important she wanted to whisper into her son's ears that early hour before time was up for school. 'Nicholas, get up!' She repeated this instruction from outside the house. She entered the room again, went close to him and smelled the intensity of the 'bomb' has subsided. Nicholas' behaviour was pushing Mrs. Marigold to the end of her rope. Nicholas jumped on his feet and panted for breath as if he had had a nightmare. His eyes went round in their sockets. Is he searching for a missing item? His mother guessed. Go and clean your face and flush your mouth with water, I'm waiting for you here' She stood waiting. A portion of the blanket Nicholas slept on was wet. His mother touched the blanket and truly it was soaked with urine. She giggled for she knew the spider tricked her son in his dream. Nicholas was not a bed-wetter but he infrequently urinated only when the spider played his pranks on him

Every pupil has a friend. But there is one boy who has no friend. Everyone fears to be his buddy. It is not only his classmates who have had a good share of his evil character but his teachers as well. Nicholas has a wonderful bottle full of farts and it works magic for him anytime he opens it. There isn't a school rule he has not bent, let alone the formalities in his own home. Finally, Nicholas quits school for the streets and continues his nasty ways till the devil finds him work. Work which never brings him back into human.

Kwabena Amoako writes fiction and non-fiction for young people and the adult. It is hardly to put any of his books down when you start reading it. He organises educational activities (reading competitions, short story writing, etc) for learners mostly on school vacations. He has titles like 'the Duck and the Eagle', 'Amy mouse and the Cat', 'The Other Friend', 'Follow Me Into the Dark', No Time' and other titles. He encourages young people to be hardworking, uphold the truth without fear and eschew drugs. He holds bachelor of Arts degree in Publishing Studies and a master degree in Curriculum and Instruction.