HILLARY & The Crash That Killed Me

A True Story by Ed Fiktus 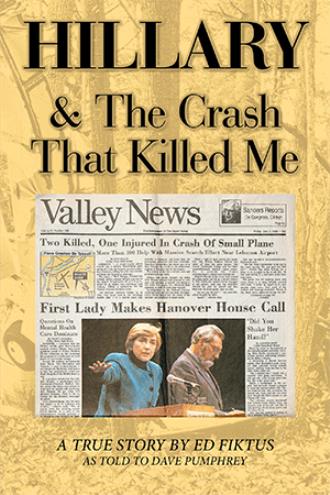 Death Does Not Come Quietly It was a bad day . . . shitty . . . overcast . . . sleety . . . snowy . . . cold . . . dark . . . Lebanon airport, New Hampshire at 5:00 pm on Thursday, December 2, 1993. Just my luck, Hillary Clinton was there . . . In getting ready for the flight home, Klaus and Harry were used to doing the same thing the same way for years. Now, all of a sudden, because Hillary’s plane was using our regular runway, they had to create different programming so we could take off safely from a runway heading in a different direction. Klaus was the pilot, so he sat in the driver’s seat, with Harry next to him. We were next in line after the First Lady, so the pressure was on to get the new programming done as soon as possible. Each waypoint on the flight path had to be entered separately. There was a lot of confusion, arguing, and even some hand slapping back and forth while they tried to get the new program put in the flight computer. After about 15 or 20 minutes, they thought they had it figured out. Then, we got clearance to take off. I was sitting in the back seat, behind Harry. Klaus had the flight manual stuffed behind his seat, so there was no room there for my 42-year-old, six-foot-four frame. Getting in the back seat through the plane’s fashionable gull-wing doors required a level of flexibility I no longer have. Klaus and I were still in our business suits, and Harry was casual. The plane had a sort of a bubble top which made the cockpit a little roomier than most. I had a really nice winter overcoat, and I took that, and my suit coat, off to give me even more elbow room in the back. As a student pilot myself, Harry’s student, I had my headphones plugged in. When we usually take off, we would see the lights of Lebanon and turn left and head over the river. We took off, retracted the landing gear, and Klaus, maybe still feeling rushed, asked Harry if he should engage the autopilot shortly after we were airborne. Harry said, “Sure,” putting the earlier conflict behind him. We were in the air probably less than a minute . . . we might have been up just a couple hundred feet or so. When taking off from Lebanon, planes were supposed to reach 1500 feet before making any turns to make sure they were in the clear. That was in the airport flight manual. As soon as Klaus put the plane on auto, he and Harry both leaned back in their seats, crossed their arms and let the plane fly itself. There were no city lights below us as there usually were . . . yet the autopilot had us turn left, way too sharply. We turned too soon, too low and too far. We were heading for trouble and didn’t know it. We went the wrong way, but it was so dark out, we couldn’t tell. It was pitch black. No moon or stars to guide us. No ground lights for reference. We were flying blind. We had no clue as to what lay ahead. And we were still climbing. My headphones crackled. The control tower radioed: “Do you see that hill?” Klaus said: “Say again?'' We didn’t see that hill. We couldn’t see it. It was so dark. A second later . . . clop, clop, clop . . . tree tops hitting the belly of the plane. No time to react. The wings! The trees grabbed hold. BAM!BAM!BAM! This poor airplane screamed in agony. You have never heard, nor have I ever heard or ever want to hear again . . . the sound of that airplane being hammered by tree after tree . . . a 150-mile-an-hour, rapid fire beating. You could hear the wings being ripped off . . . everything shattered . . . the metal actually shrieked bloody murder. It was an incredible noise. That’s what I remember most . . . I'm sure there were other noises, too, because all the plexiglass, all the glass just disintegrated. Everything just blew out. But what I remember the most was hearing the spars and the wings . . . the metal just, it actually screamed like a woman. Incredible noise. Deafening. I don't even remember hearing the engine or anything like that. I remember hearing the airplane wailing . . . terrifying . . . awful. The trees tore her open . . . clawed through her skin . . . crushed her bones . . . ripped her wings apart . . . skinned her alive . . . the plane howled as it was shredded . . . Thunderous screeching. A horrible slaughter. I was tossed around like a rag doll . . . up, down, sideways . . . so hard I actually yanked the seat belt anchors right out of the plane’s floor . . . A voice boomed from the chaos: “YOU CAN SURVIVE THIS IF YOU WANT TO!” . . . Huh? . . . I pissed and shit my pants . . . I was slammed senseless . . . everything just blew out . . . what I remember most was the plane’s screams . . . metal screaming, just screaming . . . as she was hacked to pieces . . . Louder and louder she screamed . . . The brutal beat down ended as she collapsed . . . twisted . . . to the forest floor . . . a crumpled, horribly disfigured wreck. Then . . . silence. Dead silence. Damn! I Feel Wonderful!

If Hillary Clinton wasn’t at Dartmouth that day, I might not have died. It was a bad day … overcast … snowy … cold ... dark … Lebanon airport, New Hampshire at 5:00 pm on Thursday, December 2, 1993. Just my luck, Hillary was there … We were on the taxiway, ready to take off … then the tower ordered us to abort. Hillary’s jetliner had priority over our four-seater. We were told to use a different runway. Klaus and Harry frantically tried to reprogram our flight computer. Hillary took off. Minutes later, we took off … We were too low when we turned the wrong way … We never saw the mountain … We were still climbing when the trees took us down. Three men died on the mountain that night. One came back. Being dead was a delight. Coming back was painful. This is my story. I’m Ed.