NOBODY’S SUPPOSED TO BE HERE

THE STORY OF MY OBSESSION WITH A DARK BORDERLINE 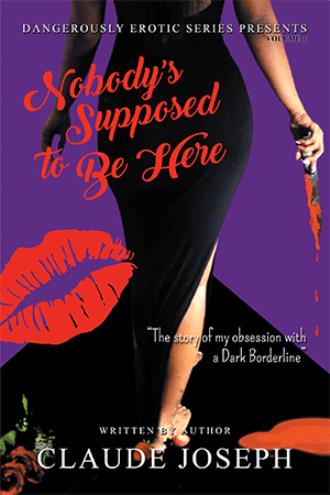 It's been three whole weeks since our last sexual encounter, and ever since then, it has been on my mind. The last time was mind-blowing. I have re-lived every single second of it over and over in my head for the past week. And for a long time, I thought it was the sex—which is incredible, but there is so much more to her. Her smell, those mesmerizing eyes, her soft skin, her husky voice drifting in and out of my life, was driving me insane. It was on a Saturday night right here at our favorite park in Metairie, Louisiana. I had checked the time on the watch; it was 11:20 pm, which was just 40 minutes before the park closed to the public. It appeared that we were the only two left, which was cool except for the security guard patrolling. We waited patiently and undetected until we knew he was gone. Once we knew he was gone, all bets were off; we started making out on our favorite park bench. The weather was perfect; it set the scene. The temperature was 74 degrees and clear. Perfect for romance and some heavily sensual lovemaking. I could feel it in the air, the electric cackle we emit whenever we are together, and she could feel it too, even more than I did. At this point, she took control of our make-out session, and her rare spontaneous side kicked in. Visualize me sitting on the left side of her on the park bench and her aggressively forcing my right hand down the front of her panties. Her breath was warm on my neck as her teeth gave me a little bite. All my inhibitions flew out of the window when she whispered in vivid detail, explaining what she was feeling and what she wanted me to do in her husky tone. If you combine all the elements of that evening, the mood, the scenery, the danger of doing what we were doing in such a public place, and her tongue finding its way deeper into my mouth— there was no way I could easily forget a night like this. She wore a two-strap white summer floral dress and a musky fragrance that seems to be the perfect blend of everything I love. At this point, my libido is at an all-time high, and I am ready to be taken over the edge. As she continued to do what she was doing with her hand, things got even hotter. Dominance was the word that popped up in my mind. She removed her dress right there in the park while I sit in awe. Shocked and excited would probably be the best way to describe my emotions at that moment. She continued her wild movements by placing my hands on her breast while moaning out of control. I used to feel intimidated by all her aggression, but it was time I stepped up to the challenge and became the guy she was craving. I grabbed her arm, spun her around, pushed her head forward, and began kissing and licking the sweat off her back down to her butt. I am now volcanically aroused; I penetrated her from the back with my penis, causing her to orgasm within minutes, and then she blacked out. It seemed as if she was in a deep mania of energy, and within a split second, it was over almost as quickly as it started. Immediately her memory came back; the first thing that came out of her mouth was, "What did you do to me?" She flipped the script big time. This was not the first time she pulled this kind of crap on me. It took me a while to put it together, but there is a routine to it—the spontaneity, then the mania, then the lashing out, and then the regret. The regret usually happens the next day or the same night. She would say things like, "This is the last time I will ever have sex with you outside." I knew what she was saying was bullshit, but as always, I nodded my head yes in agreement and looked forward to the next episode. I'm assuming this is where my obsession originated -the thirst for more and more. After catching the brunt of this behavior for so long, it started to wear on me mentally and emotionally. Perhaps this incident led me to research her behavior. I did not know what I was looking for per se. I am sure her behavior was more dysfunctional than the norm. After a proper glimpse of her dark side and research, I detected she had Borderline Personality Disorder.

Ask yourself this question?

If good girls like the bad boys, then who do the nice guys like? Of course, the science is not definitive, but the answer may lie within this story…..

This is a story of a millionaire in New Orleans who seems to have it all, but what you don’t know is that he has a fatal flaw; he’s attracted to the wrong women. The ones that smell like trouble from a mile away, and this one in particular had her demons on her shoulders. She wore them like a badge of honor. She has a Borderline Personality Disorder, pulling several weights of troubling history, and evil agendas. Her name is Andrea Locket, the alluring beauty who poses as a dainty maid for hire to get what and who she wants. Eliminating anyone who stands in her way.

But why would a man fall for a woman with so much baggage? Why didn’t he just run the other way?

I’m glad you asked because I know you are curious about the reason why. But nothing is just black and white, there is always some grey. There’s usually much more to things than we can see. That is why you must take this journey with me to where it all began.

I was born in Chicago, Illinois but raised in a small town called Mossville near Lake Charles, Louisiana. My mother passed away from an asthma attack when I was only three years old, and my father died later on from a heart condition. I was the only child, and fortunately for me, the women in my family stepped up and collectively raised me.

Being raised by these incredible women gave me a lot of insight into how important special days were to them, such as Mother's Day and Valentine's Day. On the downside of being raised by women I also saw firsthand the burdens they had to bear when heartbroken from relationships. That was painful to witness because I felt that the women, I loved could do no wrong. At least that was my truth but when I got older, I became to understand that the men they were involved with had their own accounts of what they were dealing with. Their stories needed to be told too. So that’s where I come in. I write books from a guy’s point of view, like myself, that has a certain sensitivity towards women. I explore the dark sometimes erotic scenarios that most men speak about amongst themselves that often go unheard publicly.