“You’re gonna be special, my child.”

“You’re gonna be special, my child.” 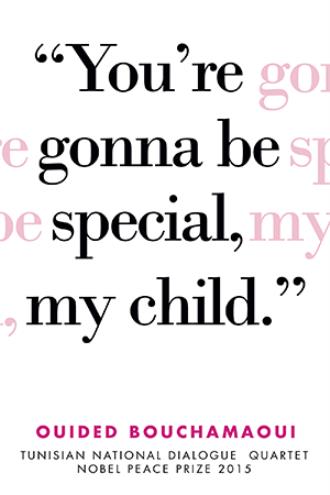 The motivation to write this book flowed naturally from the grace of the Nobel Peace Prize, a prize won the hard way by a quartet of organizations determined to unravel an untenable situation in an unbreathable atmosphere. Taking the form of an account of my personal journey leading up to the culmination of the Nobel Prize, the book rightly belongs to the genre of real biographies; nevertheless, it is at the same time a scrupulous testimony, namely mine, on events experienced first-hand during a crucial period of the political scene in Tunisia, where I was fated to play a frontstage role. So, dear reader, I faithfully offer you my narrative, which is intended to be unadorned and transparent. It reproduces events and situations as they really happened and also corrects a few (inevitable) highly exaggerated clichés, reproduced here and there in newspapers and other media. It is a witness account of an experience lived first-hand taken as I was by the irresistible swirl of the events of that period, along with and among the other actors of history. It represents the sum total of my personal journey up to that point in time where I also highlighted the significant milestones and vicissitudes in my life that had led to shaping my consciousness and helped me to form and grasp my “idea of engagement.”

Born in Gabes (Tunisia) in 1961, Mrs. Ouided Bouchamaoui is the first woman elected in 2011, to the position of President of UTICA, the Tunisian Confederation of Industry, Trade, and Handicrafts (Confederation of Private employers). UTICA is a Tunisian employers' organization founded in 1947 and represents the leaders of companies in the industrial, commercial, and artisanal sectors. Bouchamaoui is a member of the Tunisian National Dialogue Quartet, which was awarded the Nobel Peace Prize 2015 for her success in the mission that led to the presidential and legislative elections and the ratification of the new constitution in 2014. Since Oslo’s high recognition brought a new breath to the Tunisian Democratic Transition, Mrs. Bouchamaoui undertook the role of Peace Emissary. She traveled the world, to explain the importance of national dialogue, the relevance to export this unprecedented experience, and share this action, which was a long journey marked by paradoxes, difficulties, and the complexity of the moments experienced, intensely and widely, shared with the other members of the quartet. She made the commitment to represent her country Tunisia - a country considered as an exception in the Arab and Muslim region - to tell this fabulous story, qualified by the jury of the Nobel Peace Prize as a "success story." Through her various speeches and interventions, Ouided Bouchamaoui explained how such an experience could generate know-how in dialogue and mediation: by reinventing codes, demanding new ways of acting, and establishing new patterns to think politics in the noble sense of the word, which is the citizen action at the service of the collective interest. After completing her studies, she made several internships in the marketing, management, and international trade departments, in various companies. She then joined Hédi Bouchamaoui & Sons (a company specializing in construction and industry), founded by her father, and affiliated with the Bouchamaoui group. She is now a shareholder and administrator of HBG Holding (Hédi Bouchamaoui Group), focused on the agricultural, agri-food sector, finance, insurance, IT, and distribution sectors. (http://www.hbg-holding.com/en/ )