I’m Here for You 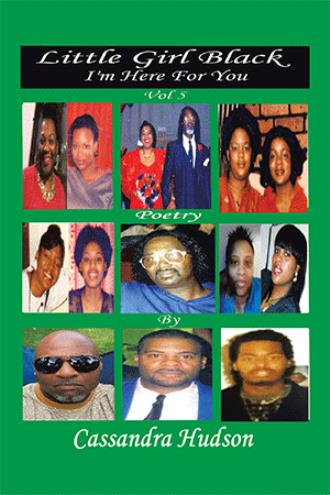 Cassandra Jefferson Hudson was born in 1960 and was partly raised on the near north side of Chicago, Illinois, and Kankakee, Illinois. Cassandra is the third oldest of eleven children, nine girls, two boys, born to her mother Mrs. Jo Alberta Jefferson, seven biologically born to Cassandra’s father Fred Jefferson. Cassandra’s father Fred also has five children born from Miss Rose Williams, three girls, two boys, altogether. Cassandra is the third oldest of sixteen children. Cassandra is proud to be a wife, mother, grandmother, and a great-grandmother. She is also a writer, author, poet, inspiring songwriter, and jingle writer, also children’s book writer. Her biggest dream is to become a novelist, a scriptwriter, and a playwright. Cassandra and her family moved from Chicago, Illinois, to Hopkins Park, Illinois. a rural township in 1970 when Cassandra was ten. Cassandra graduated from fifth grade from Lorenzo R. Smith Elementary in Hopkins Park. Cassandra’s family moved to the town of Kankakee, Illinois. Just a hop, skip, and jump up the road, Cassandra turned eleven and soon would be twelve, her family moved on Wildwood and Oak Street. Cassandra is now in sixth grade and soon would attend Eastridge Junior High. Not long after Cassandra and her sister Katherine and two other friends Dorothy Pankey and Joann Armstrong Cassandra’s best friends, together, the four of them joined the Girls Scouts, on my honor they did. After sixth grade at Eastridge Junior High, the summer of 1973, Kankakee housing authority built a clover sack with all big houses for families with at least two kids and up. Cassandra and her family moved into a new six-bedroom, two baths house, in that very clover sack, what the kids that lived there called Graveyard Junction because it was next to a graveyard. Cassandra lived out of the school district and wouldn’t be returning to Eastridge Junior High for the seventh grade. She would be bused and start seventh grade and part of eighth grade at Westview Junior High. Cassandra was always good at dancing; anything in entertainment always came easy to her in 1973 Westview Junior High. Putting on a talent show, Cassandra ‘and her little sister La Tanya had forty-five minutes to enter the talent show, way across town, and one half an hour to put on makeup and learn a dance. They danced to the Jackson 5’s “Dancing Machine.” First they had to perform for the whole school at school assembly, the same night for family and friends. They both were a little scared and just stood still until they heard their big sister Pat and her friend Lo hollering for them to come on with it. They heard the music and started doing the dance, climbing the walls, then the robot and the hooper grass, then they broke it down with the smarty pants. You couldn’t mess with her moves, they were legendary. A teacher walked up to Cassandra when everyone where heading back to class and said, “This is what you should pursue when you grow up. You’re very good at it.” About thirteen that same summer, Cassandra got a summer job and brought her first bike, a yellow ten-speed, living in a small town the way their parent kept their young minds busy. The Kankakee Park Authority would keep Pioneer Park House open on weekdays for some kind of activity and every weekend for some ping pong or dancing and also Franklin School, dancing, girls’ basketball, and cheerleading. When Cassandra moved to Kankakee, she didn’t know that her friends, the young ladies and young men she met at the ages 11–14 would still be her very good friends to this day. What’s up, Kankakee? Love always, Cassandra Jefferson Hudson.