Stories of Faith and Hope 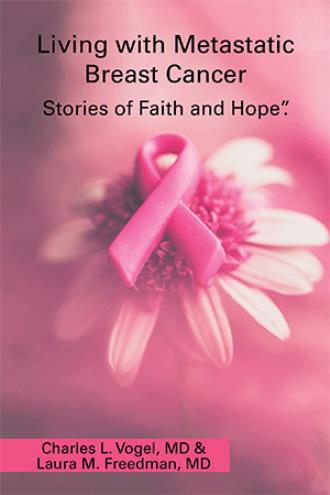 Written by oncologists and patients, the authors have presented real, inspirational clinical histories specifically for patients with metastatic breast cancer (MBC). Having been told by their doctors that MBC is “treatable but not curable,” many focus on the word incurable. This book describes the clinical courses of thirty-nine woman and one man living with MBC often many years beyond what statistics would predict. These are stories of coping, courage, adaptation, prolonged survivals, true grit, and occasional miracles. After reading this book, it is hoped that the reader will gain hope and persevere, feeling that they, too, can beat the statistics.

Charles L. Vogel, M.D., F.A.C.P., trained at Princeton, Yale Medical school, Emory, and the US National Cancer Institute (NCI). in 1975 he became the first Chief of the Breast Cancer Division and, ultimately a tenured full professor and clinical director of the University of Miami (Florida) Comprehensive Cancer Center. After leaving the University he pioneered breast cancer clinical research from within private practice settings. Over the past three decades he has: become a nationally and internationally recognized breast cancer key opinion leader; published over 500 manuscripts and abstracts; and participated in clinical trials leading to commercial availability of most of the breast cancer therapeutics in use today. He currently practices breast medical oncology at the Baptist Health Miami Cancer Institute/Plantation, FL. Laura M Freedman, M.D., completed medical school at the University of Michigan and trained in Radiation Oncology at MD Anderson Cancer Center in Houston, Texas. She began her career at Wayne State University and the Karmanos Cancer Institute. She joined faculty at the University of Michigan before joining Sylvester Comprehensive Cancer Center in 2011. She is currently the Director of Radiation Oncology at the Deerfield Beach location and an Associate Professor of the University of Miami Miller School of Medicine. Over the past two decades she has published articles focused on education and has been involved in multiple national committees for the field of Radiation Oncology. She is currently a boards examiner for the American Board of Radiology.