by Robert and Sandra Crofts 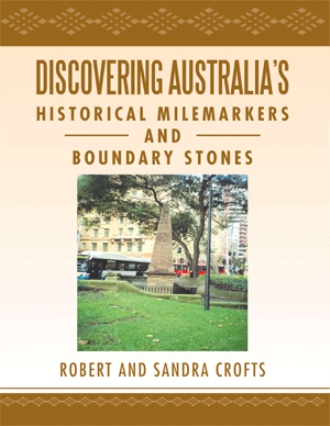 The best way to understand and enjoy the richness of Australia’s historic heritage is to go out and experience it.  This firsthand experience provides families with a sense of continuity to Australia’s colonial past and to experience nostalgic feelings of belonginess by following the footsteps left by earlier generations (Johnson 1980).  This book was written to inform interested community members of the silent Australian history, inherent in the milestones, that still exists around us.  The book catalogues many of the sandstone and concrete milestones that line the five major roads leading out of Sydney.   Some milestones in rural NSW, Victoria and Tasmania are added to inform others of these precious historical monuments who are unable to view the stones in the Sydney metropolitan area.  Later chapters identify the location of the remaining boundary stones in Sydney and Parramatta as well as old road alignment markers in the City of Ryde. The final chapter describes milestones that have a commemorative function.  This information may be seen as only relevant to a specialist market but with the increased popularity of Australian colonial history, this book will have appeal to many Australians. The book has been written in an academic format, however the language is aimed towards families who can use each chapter to locate the remaining milestones in sequence on family outings.  Other attractions near the milestone are identified which families may choose to enjoy at the same time as visiting the selected milestone.  Pieces of our history are being lost but by considering these monuments, in the midst of our hectic lives, we can imagine the type of life the colonial settlers experienced.  As well, visiting the milestones raises community awareness of the priceless value of these historic monuments so that important remnants of our colonial past can be preserved for our future generations.

As new roads were being constructed in the colony, milestones were originally at one mile intervals.  In rural areas, milestones were not usually placed for the entire distance between towns.  They were usually placed a few miles on the approach and then again for a few miles after the stagecoaches left the town.  Due to the loss of many original milestones, the distance between each remaining milestone can be more than one mile.  An attempt has been made to make an as accurate as possible catalogue where these milestones were originally positioned with a description and photograph of those that still remain either in their original or new locations.  The survey taken for this book has attempted to be thorough but we acknowledge that our survey is not complete.  There are still milestones and milemarkers to be discovered.

Although the milestones indicate two directions, for ease of cataloguing, the milemarkers in this book are identified by the location that they lead to away from Sydney and incorporates sandstone, concrete and timber milestones along the major roads leading out of Sydney.  Photographs in this book are taken on one face only.  Mileages on those remaining in their original locations have been checked for accuracy to the final destination and are still correct.  The GPS for some milestones has been recorded for those who are familiar with this technology.  Unless otherwise indicated, all the milestones can be found on the left hand side of the road leading towards the destination inscribed on the milestone.

Safe community access to the milestones is not always possible as many existing milestones remain in their original locations on major arterial roads with limited or no safe car parking nearby.  Milestones that do not have safe community access are identified.  Although the milestones have been retained for community enjoyment and many have safe footpath access, extreme vigilance and caution should be exercised as there is a high risk of injury to children or pets near major arterial roads with

Robert and Sandra Crofts began this self funded project to investigate and record the sandstone, concrete and timber milestones/mileposts initially in Sydney and then expanded the project to include some historical markers in rural NSW, Victoria and Tasmania. Robert brings his passion for history and photography while Sandra brings her research skills in nursing to the project.