The Honor of the Ken 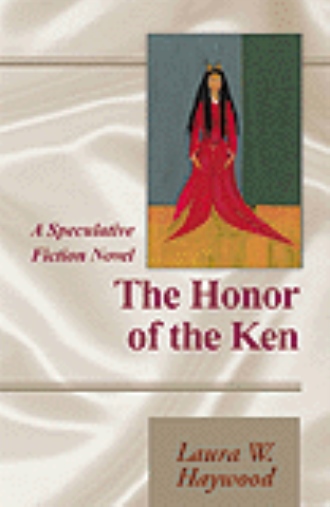 The Honor of the Ken is speculative fiction set several hundred years in the future on Kenakenkarney, a planet colonized -- despite the presence of an indigenous race, the Ken -- by a religious cult from Earth.  The Terrans promptly enslaved the Ken to mine a precious mineral.  Some two-hundred years later, the Ken were freed, but most of them, having no other opportunities, remained miners.

Adanna Ming, the daughter of a Ken father (a miner) and a Terran mother (a teacher), inherited her fathers copper-colored skin, pointed cats ears, and other Ken attributes.  The only obvious sign of her Terran ancestry is blue eyes.  Through the intervention of a friend of her mothers, she was the first Ken admitted to the prestigious Womens University.  There she met Marielle Adams, a spoiled, bored, but very bright heiress.  To create an interest for herself, Marielle takes Adanna under her wing.  She introduces her as her friend, teaches her things Adanna has no way of knowing, and learns a great deal in the process.  The two women became very close friends.

After graduation, Marielle created opportunities for Adanna, who used them to achieve success as a writer and, briefly, as an actress-dancer.  In addition to writing, Adanna ran a school for Ken children, trying to teach them the two cultures of Kenakenkarney.  She also became a symbol to both the Ken and the Terrans, in very different ways.

All her success cant save her, however, when the Terrans, desperate for miners to work a new mineral find, re-enslave the Ken.  But Adanna isnt sent back to the mines; instead, she is bought by Ginja Shareef, a woman she knew very slightly at the University.  Ginja is a gifted poet, and Adanna admires her work very much.

What Adanna doesnt know -- has no way of knowing -- is that Ginja hates her.  She blames Adanna for a fundamental loss in her life and has bought her to exact justice.  As dedicated as Ginja is to justice, Adanna is committed to the principles of freedom.  She refuses to give in to Ginjas demands, accepting Ginjas abuse as the price of her principles.  In the course of this brutal struggle between the two women, they come to know each other and a wary respect grows between then.  That respect, however, in no way lessens their fierce battle of wills.

Marielle, meanwhile, has formed an abolitionist group and is fighting slavery every way she knows.  A prime weapon in her arsenal is Adannas last novel, a novel about slavery and freedom, that expresses Adannas ideas powerfully.  After a series of Machiavellian exploits orchestrated by Marielle, the slavery law is repealed -- but manumission will come only after a cooling-off period.

Ginja has come to understand that she cannot break Adanna by force, and seeks other ways to crack her will.  After failing to compel Adanna to use force (something that violates Adannas pacifist principles), she almost succeeds by telling Adanna exactly why she will do anything to defeat her. The charge horrifies Adanna, who has no way to defend herself against it.  She also threatens repeatedly to sell Adanna to Marielle,  a threat Adanna dismisses.  Adanna admits freely that being owned by Marielle would be -- for her -- worse than anything Ginja might do to her, but she is absolutely certain Marielle would never betray her by buying her.

But Marielle, knowing about Ginjas brutality and with the kindest of intentions, does exactly that, and Adanna finds herself having to fight someone she cares about deeply, someone she doesnt want to hurt.  A second battle of wills ensues and it is a battle Adanna knows she cannot win.  It isnt until a misunderstanding between them escalates into a situation that goes completely out of control that Marielle begins to understand why Adanna is acting as she is.  Their struggle continues, but the fr

Laura W. Haywood has edited (or co-edited with Isaac Asimov) three anthologies, and published fiction, science fiction, mysteries, and poetry under her own name and as Alice Laurance. She formerly worked in public relations for a major corporation.