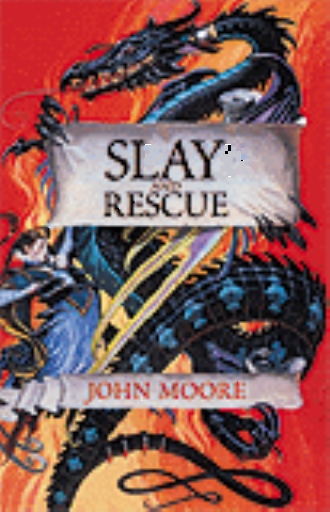 It's not easy being a prince.  There's dragons to slay, villains to fight, and one beautiful princess after another demanding to be rescued from a fate worse than death.  In fact, young Charming thinks he's just about ready for a leave of absence.

But you're always on call in the Slay and Rescue business, and soon Charming is working overtime when he becomes embroiled in a plot involving an evil sorceress, an enchanted castle, a very angry dragon, and no fewer than three beauteous damsels in distress, each with her own plans for our hero, and none of them to be trusted long enough to shake a sword at . . . .

"A humorous fantasy, and a charming one at that . . . a delicious job . . . all in all, good vulgar fun, and a neat job of melding and modernizing." (Asimov’s SF Magazine)

"John Moore’s delightful SLAY AND RESCUE stands out from the crowd.  Moore has a good sense of timing and knows how far he can carry a joke before it becomes tiresome.  I laughed throughout SLAY AND RESCUE, and it's not easy to make me do that these days."  (Aboriginal SF Magazine)

"A glorious romp through fairytale times and places.  And, of course, everybody lives happily.  Fans of Terry Pratchett’s Discworld will enjoy this." (Kliatt)

John Moore is an engineer who lives and works in Houston, Texas. His stories have appeared in New Destinies, Realms of Fantasy, Tomorrow SF, Writers of the Future, Marion Zimmer Bradley's Fantasy Magazine, Aboriginal SF, and other magazines and anthologies.