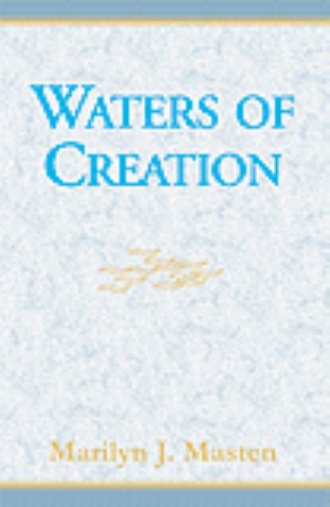 Beguiled by the evil entity, the yellow race was falsely led into believing they would rule the world above all others.  Six years have now passed since the great war, but the earth's land masses have physically changed as former countries and continents have become almost unfamiliar.  The four seasons no longer exist, the waters are slowly becoming dust-bowls of extinction, and Earths moon no longer softly protects the night.  The evil one is still not satisfied; for the Holy Waters of Creation are the key to which he vows dominion over all that is left of Gods prescious creations.  And, so in this year of 2039, a great battle is destined to take place between the Archangel, Allestra-Terra, and the Fallen Angel.

Felicia and her grand-daughter, Angella, live in a partially sheltered parking lot that overlooks Lake Erie, but the lake is slowly dying as are the people who live on her shores.   Felicia befriends Sam, a 13 year old Apache Indian boy and his father, Billy, who is paralyzed.  Felicia thanks God for her cherished memories of nature and desperately wants Angella and Sam to have a little happiness.  So, when Sam finds a dying pup, Felicia allows them to keep the dog who becomes their protector.  A black couple, along with their teenage son, Byron, also live in the parking shelter and both familes become united in friendship.  Father Vincent shares his church with ministers of other faiths, for it is one of the few Churches left standing within the city that feeds and gives refuge to people of all colors and beliefs.  After a church service, Angella's 7th birthday is celebrated and both families ask Father Vincent for santuary, to which he consents.  That evening, a voice calls upon Sam's dog, beckoning "The Apollo of Dogs" to gather the children of colors and guide them through an ancient passageway.  A great supernatural mystery then unfolds, as they are confronted by a powerful warrior of infinity who tells them that she is "Allestra-Terra", Archangel of the 9th Power.  She explains that she was chosen to protect and defend the Waters of Creation against Satan who will soon come to do battle for them, as he needs them to enslave humanity.  Allestra-Terra also represents the colors of mankind and shows them proof of this, as Allestra of the Black Race, the Red Race, and the White Race appear from within her.  However, Allestra is not yet whole and she needs one of the Yellow Race to stand with the other colors of mankind against Satan.  Therefore, Allestra sends Byron, Sam, and the Apollo of Dogs on a journey to bring back one of the Yellow Race.  While the two boys go in search of one of the Yellow race, Angella develops a very close relationship with Allestra.  Satan finds Allestra and tries to tempt her into giving up the Waters, without a fight, while he has sent his slave, Hemortus, to kill the Yellow One, so Allestra would not be complete to win the battle.  Hemortus struggles with his conscience and fails to do Satan's bidding but is now terrified at what Satan will do to him, as Byron and Sam triumpantly return with one of the yellow race and Allestra then prepares for battle.  Satan enters Holy Ground but Allestra defeats him with the help of Humanity and she then rewards the children of colors as she restores the earth with the "Waters of Creation".  Angella's heart is breaking for she knows that Allestra will soon leave the earth, and as she reluctantly says goodbye to Heaven and Earth's warrior, Allestra-Terra seals their special bond by sharing a long-lost truth with her.

Marilyn Masten works full time at a hospital in Cleveland, Ohio and enjoys her job as a Medical Transcriptionist. To unwind from a hard day's work, she enjoys writing in her spare time and is especially interested in the supernatural or almost any type of fiction filled with adventure and a meaningful message.

Besides creating unique characters, one of her other hobbies is cooking, as she enjoys experimenting with new and different ingredients. She is an avid fan of baseball, football and basketball, but her very favorite things, however, are spending time with her family and getting together with her very dear friends who, together, share their experiences of life in general.

Since moving back to Cleveland, she has experienced the colorful excitement brought to life within the community through its beauty and renaissance, its sports teams, and its hard-working people.