The Sea Of Love 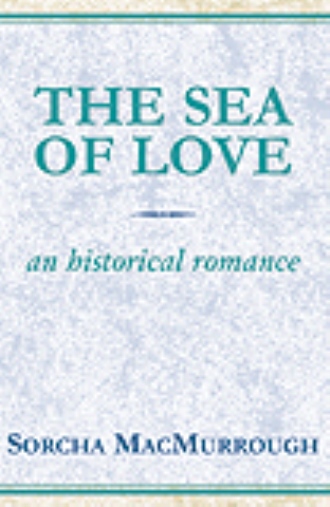 Young widow Aidann O'Flaherty is falsely accused of the murder of her stepson by her brother-in-law Donal Burke.

She meets the enigmatic Declan Burke, newly arrived from England, who has been selected to take over the clan after her husband's death.  He seems her only ally as Donal brutually beats her and imprisons her.  But why should he help her, when he has everything to gain from her death?

Aidanna's trial for murder is heard, and she is set free by Declan.  Just as the trial ends, hoever, the evil Donal brings forth a dead body which he claims belongs to her last remaining stepson, Diarmuid.  Declan now believes she is a murderess, but his verdict has already been reached. Before they can execute her, however, Aidanna's cousin Conn and best friend Tomas help rescue her from the enemy castle.

Aidanna is now disowned by her father, who also believes her to be guilty. She takes to a life at sea trading.

Soon after her trial, she sees one of Donal Burkes's ship in the distance.  A sack is thrown into the water.

Recovering it from the bottom of the sea, she finds Declan Burke inside it, nearly dead. Realising the danger they are now both in, she takes him back to the small island where her uncle has a monastery, and where her stepson Diarmuid has been hidden for safekeeping.

Disguising herself as Diarmuid, she tries to find out the truth about Declan and why he came to Ireland.  She now suspects that her husband had been murdered as well, and hopes with Declan's unwitting help that she can find the truth.

Their friendship grows for one another;he does not see through her disguise.

When he does find out her tuee identity, he feel betrayed and confused.  but he cannot keep away from her for long, and they become lovers.

But despite his love for Aidanna, Declan can see no future for them.  He is engaged back home in England to his patron the Duke of Norfolk's daughter, and tells her he must leave one day.  He cannot tear himself away, however,  and together they live like Adam and Eve in their cave and on the beach.

They are forced to give up their idyllic life when Donal and his clan overrun Aidanna's main castle, kidnap her sister, her step-son Diarmuid, and her father, and try to burn all her ships.

Aidanna rescues her sister and Diarmuid, but her father is killed.

She learns from Diarmuid that the Spanish, invited by the evil Donal, are trying to invade the coast of Ireland now that it has been rumoured that Henry VIII is old and will no doubt die soon.

Donal Burke is in league with the Duke of Norfolk, Declan's prospective father-in-law, trying to ensure a Catholic succession after Henry dies.   Caught in this hopeless web of intrigue, Declan  returns to London to clear his good name, only to be arrested for treason.

Aidanna, declared a traitor herself through false information given by Donal Burke, must risk all she has to clear Declan, in a perilous race against time. Can she help stop the Spanish invasion?  Can she free Declan from the tower before he is executed? And what will the powerful Duke of Norfolk do to her if he ever discovers her true identity?

From the west coast of Ieland, to the shores of England, to the glittering courts of Henry VIII and Edward VI, this stirring saga is bound to keep you rivetted.