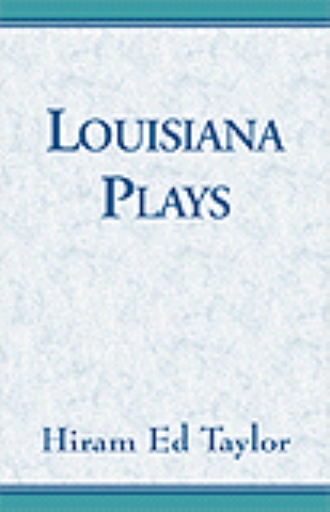 LOUISIANA PLAYS by Hiram Ed Taylor is a collection of 4 plays developed in workshops or staged readings at the New Orleans Theatre Experiments Lab, a group dedicated to creating new works about Louisiana.  The first play, PROPHECY a comedy about the future of mankind was given two staged readings before an audience at the Contemporary Arts Center.  The second play SAVAGE PRIDE, a ghost play about survival, was also given a reading at the CAC.  The third a musical about sex, BOURBON STREET had 5 songs performed at the DramaRama Festival at the CAC and then a staged presentation at LePetit Theatre du Vieux Carre.  The last musical about life after death, HEAVENS BAR  was presented at the Firehouse Theatre in Mobile, Alabama.

Taken as a group they represent a body of work by Mr. Taylor over the past 8 years.  All four scripts are comedy, although they border on serious themes and are dramatic and tragic in places.  Louisiana serves as a place where life and human folly are examined in comic detail.    There is an abundance  of terrific roles for women in each play; especially for older actresses over 40.  They seem to represent the MotherGoddess who controls the flow of the script through the mess the men characters make of their lives.  Wife, mother, fortune teller, heavenly bartender (god) or whore, they are the power in each script.

The scripts may not seen commercial because of their content and language.  Musicals about sex with S&M numbers and Homosexuality presented as normal every day events are hard to get produced in current regional theaters concerned with their grants being cut because of  the current government standards.  Although Southern Baptist audiences in Mobile, Alabama  loved HEAVENS BAR, script readers in other parts of the country have decided it is too much about religion for their theaters to take a chance on possibly offending someones beliefs.  So, we have chosen to publish the plays as written without care who they may outrage.  They are bold and they are daring and isnt that what good theater is suppose to be about?  They are also highly theatrical and deserve to be on a stage performed live for an audience.  But, until that time, here they are in print.

Hiram Ed Taylor worked as a writer in New York City and Hollywood for 20 years before moving to New Orleans. His last show in New York was the musical BUDDIES, other NYC credits include TEASERS, MOVIE BUFF, FIFTH AVENUE, BUMPS& GRINDS, and MEMBERS which won the First Place Bultman Playwriting Award in 1974. MAN OF MY DREAMS was produced in Hollywood as was GOD SAVE THE QUEENS. Hiram works as a documentary filmmaker with 3 works shown on PBS. He has written several screenplays, short stories and two novels.