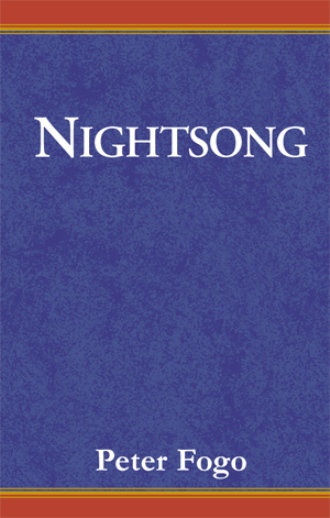 A fatal wolf attack in the woods north of Duluth, Minnesota threatens to envelope the area in a deadly confrontation between a survivalist group and an undermanned sheriffs department.

Nightsong tells the parallel tales of a young black Beta and acting Sheriff Ed Nelson as both struggle to maintain control of the events that surround them while coming to grips with more elemental, instinctive forces.  For the young wolf, survival inevitably depends upon his willingness to abandon his subordinate status and challenge the Alpha for pack supremacy, a course of action that will result in exile and death should he fail but will confer mating rites with his lifelong hunting companion if he prevails.

For Ed Nelson, the strange circumstances of the death in the woods jeopardizes his reputation and presents him with seemingly insoluble problems as he counts down the few remaining months until his retirement.  And in the middle of these perplexing riddles, he suddenly finds himself the object of the romantic advances of his secretary, a distractingly attractive redhead over twenty years his junior who had never before indicated that their relationship was anything but platonic.

Nightsong bridges the barriers between beast and man as both cope with the challenges and responsibilities of authority and the irresistible drive towards sexual attachment that transcends the physical.  And in the quest to set existence right, the paths of wolf and man intersect, binding them to a destiny neither can fully comprehend.

Peter Fogo's poetry and fiction have appeared in such varied publications as Rolling Stone, Midwest Quarterly, Black Bear Review, Prairie Winds, Snake River Reflections, The BoomerPhile, i.e. Magazine, Lake Superior Review, Ellipsis and Arrowsmith.  He is the author of two volumes of poetry:  Single Again (Raspberry Press, 1980) and A Language That Keeps Company With the Moon (Mac*Kinations Press, 1992).  Nightsong is his first novel.