Fun Things You Can Do With A Catheter 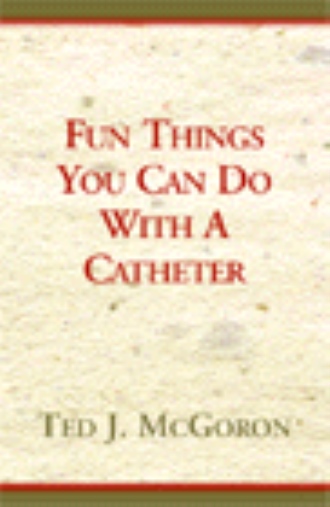 This is a true story about prostate cancer and about elimination of the malignancy by removal of the prostate. It is an autobiographical record of the writer's own experience.

Mr. McGoron was told his PSA had gone up at an unexpected rate and was advised to consult a urologist. After administering some tests and studying the results the urologist told Mr. McGoron that he had cancer. All the methods of treating the malignancy were explained to Mr. McGoron and he was told to consider all of them and then decide which one he would prefer used to eliminate his cancer. He made up his mind; for him it would be surgery. From that day on he and his portrait artist wife began taking notes, so that they would be able to recall all the things which would take place during the preparation, the surgery, and Mr. McGoron's recovery. When it was all over and he had time to read the notes he realized that a lot of the things he had been required to do, while seeming alarming at the time, had in fact turned out to be, at the least routine, and sometimes even humorous. This book is a record of how it looked to the patient as it was happening when the outcome was still unknown, and then during and after Mr. McGoron's recovery when things began to appear rather much in control.

The reader is assured that using current techniques doctors can now expect, in most cases, a radical prostatectomy to be successful. This is the point of the book, to reassure the prostate patient. It is important to note that ignoring the possibility of prostate problems represents the biggest danger to a man. And those problems can be much more than merely a matter of difficulty in urinating.

Mr. McGoron is aware that prostate cancer is a serious, often fatal, disease, in fact the leading disease and one of the leading causes of death among American men, particularly black men for some unknown reason. But he also knows it is often fatal simply because it is not always recognized in time to be properly treated. Primarily this is because most men don't consider it worth worrying about even though about one in five will suffer from prostate cancer. Then, even if they suspect they have the disease, some men will ignore the symptoms because it is generally believed that treating prostate cancer will make a man impotent. And to many men that is a fate worse than death, literally.

First of all Mr. McGoron learned that detecting a malignant prostate early enough to treat it is possible with a PSA test, something rather ordinarily prescribed by most doctors for men over forty who get regular check ups. And once the malignancy is discovered, Mr. McGoron found, it can be treated in many ways, all of which can be done without the patient facing the inevitable loss of his sexual faculties. As Mr. McGoron points out, surgery techniques have been developed to the point that in most cases radical prostatectomy patients are able to have erections a short time after the surgery.

So Mr. McGoron decided to write this book about his experience and to do it in such a way that the prostate cancer patient, and anyone who has any connection with such a person, will enjoy reading it while learning something which will be of benefit to the patient at the same time. It may, in fact, very well save his life. So how does he do this? He does it by sometimes using a little subtle humor, but, nevertheless, by being factual all the time. You see he knows how it feels to have a physician tell you that you have cancer.

"When your doctor tells you that you have cancer the words will hang in the air between you for a while, like invisible smoke, because you don't know at first

Ted J. McGoron had a radical prostatectomy to eliminate a malignancy. This is the three year, sometimes humorous, record of his experiences from diagnosis through recovery. Mr. McGoron, a Korean War Veteran, is a graduate of Xavier University with a degree in English, and a freelance writer.