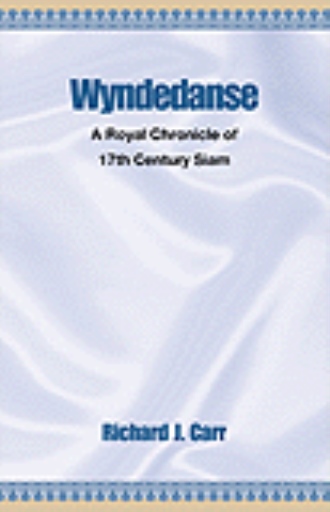 Wyndedanse, which stars Siam´s greatest poet, Si Prat, deals with the ascendancy of Siam in the 16th century, her gradual decline in the 17th century, and her fall to Burmese invaders in the next century. The saga features an 18th-century oriental and occidental cast of characters. For instance, one such character is the Greek-English favorite of King Narai, Constance Phaulkon, who rose from a street gamin of a village in Greece, served with the British Navy, and became virtual prime minister of Siam in 1686 with eyes on the throne itself. Another is the poet Si Prat, son of the court astrologer and a slave woman, depicted as recording his concerns for the future of the kingdom in a celebrated Siamese classic, "Ode Foretelling the Fate of Ayutthaya," which serves as the anchor of the story. Numerous other personalities emerge from the shadows of the historical past: Prince Rupert of the Rhine, supreme commander of the English Fleet; Samuel White, interloper, then noble of Siam; Yamada Nangamasa, commandant of a semiautonomous Japanese contingent guarding the sovereign; William Strangh, of the London Office of the English East India Company; Phra Phetracha, superintendent of the Department of War Elephants; Princess Yothathep, daughter of King Narai; Luang Sorasak, bastard of King Narai; the Japanese-Portuguese-Malay wife of Phaulkon, among countless others. The style is that of a royal chronicle of 17th/18th-century Siam as it attempts to capture the sounds and nuances of that long since-vanished time and is for that very reason romantic and exotic as well as visionary. It seeks also to fill a yearning for adventure both philosophically and exotically unavailable in most works that purport to be historical novels.

The characters and events in this novel reflect for the most part actual characters and events. Some liberties have been taken with places, situations, and sources in order to support the overall theme. Wyndedanse is must reading for everyone since it details a history that stands as a metaphor for what well may be the eventual fate of every country in the world, a fate that impacted Thailand in a compelling way long ago. Those unfamiliar with history should immediately correct their deficiency by reading and studying this novel that establishes an event in the history of old Siam (now Thailand) as an enduring archetype.

Richard J. Carr is currently a Ph.D. candidate in Germanic Languages and Literatures at the University of Virginia. Wyndedanse is the fruit of a four-year stay in Thailand where he acquired a knowledge of the Thai (formerly Siamese) language. Carr worked at the Library of Congress for many years where he cataloged Thai books for about four years as well. He is also the author of a translation (1974) of Nicol_s Guillen_s poetry collection Tengo. He was born on May 24, 1935, and is consequently one of the oldest graduate students at UVA. As a linguist of some accomplishment, he is fluent in German, Spanish, French, and Thai. An interest in exotic literature dealing with Southeast Asia dates back to the years of the U.S. aggression against Vietnam. The superficial character of what passes for the modern American novel became the motivating force for Wyndedanse, his first novel.