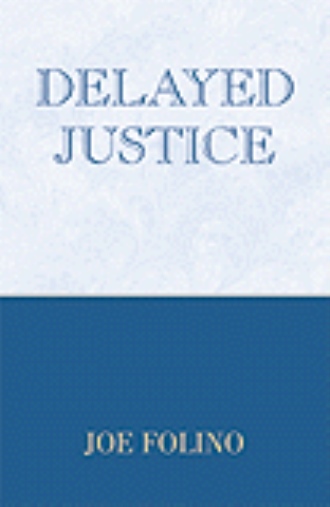 Delayed Justice is the story about the complex life of Pauli Rizzo, a 23 year old Marine veteran and his return to the town of Bridgevale Pennsylvania. After four years in the Marines with action in Korea he reluctantly returns to the only home he has ever known. Bridgevale is a steel mill town a few miles west of Pittsburgh, located along the Ohio river. He is returning to settle a small estate left by his mother who passed away while he was overseas.  His father died when he was a child and the only father he ever knew was Tony Canale, a barber and friend who set up a barber shop in the family home to help with expenses years ago.

Pauli wants nothing more than to sell everything and leave for California.  He has nothing but ill feelings for the town he grew up in.  He ignores attempts by Tony to join him in the barbering profession.  Before he can close out everything he meets Frank Belamo a Vending Machine entrepreneur who has ties to the Mafia and organized crime.  Pauli is impressed with Frank's lifestyle and more impressed when Frank offers him a job with his organization.

Against Tony's wishes he joins Franks operation and with dedication and loyalty soon becomes Frank's most trusted employee. He meets and has an affair with Frank's secretary, Traci and soon finds himself in love with her. Although she is unhappily married her husband Greg refuses to give her a divorce. One night in a jealous rage he kills Traci and leaves her bloody body on Pauli's porch.

Pauli is devastated and calls upon the organization for retribution. Justice is swift and Greg is properly disposed of. When Frank sends Pauli to his summer house at a lake resort to recover emotionally, Pauli soon finds himself involved with Frank's young daughter, Angela, who is Frank's only child and is spoiled beyond belief. She soon entwines Pauli into her life and they have a serious affair. Eventually they marry with Frank's blessing, but here is where the trouble begins.

Frank Belamo is concerned about his daughters future and seeks a more complacent lifestyle for her and Pauli. He convinces them to take over and run a Nightclub Dinner house at the lake resort he acquired as a bad debt several years ago. He now sees it as an ideal and legitimate operation for his daughter and new son in law.

It is a difficult first year but Pauli is convinced he will eventually make a success of it. In a short time Angela tires of the subdued seasonal lifestyle and out of boredom becomes involved with a supper club pianist, Art Lanning who was hired during the season. After a torrid love affair with Art, they plot to kill Pauli and to make it look like an accidental shooting of an intruder.

When the plan backfires and the "intruder" turns out to be her own father, that Angela shoots, she goes into shock. Pauli, unaware that he was the intended victim assumes the blame in order to protect Angela. Angela does not come forward with the truth and Pauli, with the help of the organization is sentenced to 3-5 years in prison. This allows Angela and Art to continue their affair, but with considerable problems brought on by Angela's mother who has learned the truth.

Pauli is released from prison after serving three years. His father figure Tony Canale has died while he was serving his time and circumstances now dictate more than ever that he should leave the area. He proceeds to California via Las Vegas and while waiting the repair of his car is befriended by Vito Argenda and his family.  They take to Pauli and help him establish a small but lucrative slot machine venture.

He is establishing a growing business when the Argenda's introduce him to Nicole Campbell, a young and attractive widow who owns a beauty salon. They have an affair and soon decide to marry when Nicole discovers that she is pregnant. They are both elated over the news and leave for California for their honeymoon.  They ar

Joe Folino, A Navy Veteran, AeroSpace Administrator, Actor, Restauranteer.... began his writing career in his sixties. Residing in the North Central Valley of California with his wife Dinah and their Sheltie Pepino. This is his third novel. Each filled with mystery and suspense....and a surprise ending.