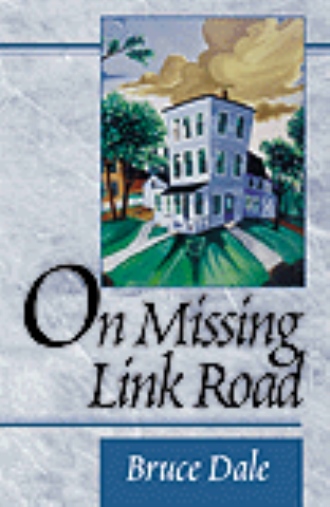 On Missing Link Road, a story of affluent brothers on the lam and the poor rural family that utterly changes their lives, takes place in the summer of 1972. Ethan Leblanc has led a charmed existence until he picks up his schizophrenic younger brother Jeff from an exclusive New Hampshire mental asylum. What happens to them after they lead police on a high-speed chase down the desolate country route is told through the eyes of both brothers. The two officers are killed, but the accident occurs under mysterious circumstances obscuring who is really to blame. Hiding out with the equally troubled Osborne family and their livein nurse Karin, each of the siblings has a love affair which leads to opposite fates as the dragnet closes in.

The crash on the Missing Link is shock therapy for Jeff who starts a progression back to sanity, while it sets Ethan into a downward spiral that forces him to re-evaluate everything he once took for granted. Eddie and Esther Osborne are the aging pair of alcoholics who take the young men in as hired hands. Their son Dorian, a reclusive but adventurous artist, is attracted to Jeff. Karin, the burnt-out young beauty, has lost her own family and latches on to Ethan as her only hope for escape from the deadend town of Charlestown. Jeff seems to recall dropping prescription anti-psychotic pills into Ethans coke while he was driving. Ethan loves his brother and fears Jeff will be put away for life, so he desperately concocts the coverup story that hitchhikers beat them up, stole his Jaguar, and led pursuing cops on the fatal chase.

In the brief breathing spell of recovery, the story explores the romantic yearnings of the four young people as well as taking the older folks through their own wild bouts of love and hate. The bizarre friendship of Karin and Dorian, Esthers manic-depressive manipulation of her son, and Karins tender care of Eddie who is recovering from a stroke all contribute to the pressure cooker that eventually drives the straight and gay fugitive couples out of the hauntingly dilapidated house. Things explode when Esther steals Dorians paintings in hopes of selling them for food, and local cops stage a sudden invasion. On the run, the pairs of lovers face treacherous obstacles: a graveyard drug orgy that punctures Ethans defenses, Jeffs battling off hallucinations while attempting to get takeout from the diner, Karins daredevil tactics in a stolen truck, and a brutal attack on Dorian by a predatory park ranger and his cronies.

The climactic chase through dense woodland terminates in several surprise developments that test the limits of love and responsibility in all concerned. The interchanging of Ethan and Jeffs personalities has a positive ripple effect on those around them. They, in turn, are indebted to Karin and Dorian for seeing them through the most difficult time of their lives. Our missing links are rarely what we would have imagined.

Bruce Dale has written over fifty books, screenplays and plays, many of which were produced in New York, Los Angeles and Boston. “Wanda and her Dog,” “Sins Against the Body,” and “Up on the Roof” were the most widely seen. “The Beauty of Life” is a novel available from Xlibris. As a stage play, “On Missing Link Road” won a grant from the MIT Council for the Arts. Productions took place in Cambridge, MA and New York. With his lifelong collaborator Charles Wright he created “Lost in the Magic Hotel” and other stories.