Growing up in the Texas Panhandle During the 1930s and 1940s 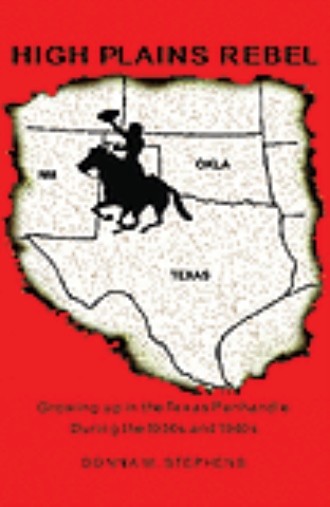 This is an action-packed, fast-paced account of the early life experiences of Darline Gay Nation who was born in 1927 and grew up in the High Plains town of Higgins, Texas. The Prologue, which includes a description of the establishment of the town of Higgins, provides the context in which much of her story is set. A second major setting for this book is the family ranch located along the Texas-New Mexico border north of Clovis, New Mexico. This story follows Darline as she travels from one side of the Panhandle to the other, never far from action, whether it is in the small town of Higgins and its surrounding area, centrally located Amarillo, or out at the ranch, working in various capacities.

Darline Gay Nation was born into a family of Western survivors who faced many hardships and always worked very hard, and no less was expected of her. Darline is first encountered as a frightened, yet defiant, 14-year-old girl who, as the result of a prank she played in Higgins, has been sent for the summer to herd 3,000 sheep by herself on her aunt’s ranch, located on the Texas-New Mexico border. Through a series of flashbacks, stories about her family, the ranch, and details of her childhood are related.

Stories of Darline’s grandfather, Alfred Wheat, and his family give an insight into the settling of the Oklahoma and Texas Panhandle areas during the late 1800s and early 1900s. As a buffalo hunter, wagon freighter, homesteader, drugstore and saloon owner, as well as a general store operator, her Grandfather Wheat did what he had to do to raise his children and provide a home and living for them. The stories of this family are the stories of how land was settled and how small towns were established in that area.

Her father left her mother, Ada, when Darline was two years old. Through most of her formative years, Darline lived with her hardworking mother in the Higgins Hotel, which was owned by her two assertive aunts, who were very important forces in Darline’s life. Aunt Dode and Aunt Fan, along with her mother, Ada, struggled to make a living for themselves and the assortment of stepchildren, nephews, and nieces who lived with them in the hotel through the hard times of the Great Depression and the Dust Bowl. Everyone in the family was expected to work from morning until night, seven days a week, to keep their hotel, beauty shop, beer joint, and cafe open and running.

As a strong-willed and adventuresome girl who is on her own much of the time, Darline is well-known in her home town and becomes involved in many adventures and escapades. Serious injuries and illnesses that require her to be hospitalized for long periods, fights, and pranks, including the one that results in her being sent out to herd sheep, punctuate descriptions of the day-to-day life in a small town during the 1930s and 1940s. The book follows activities of Darline and her best friend, Nita, which are typical for the time, as they grow up in the small town of Higgins. However, as an only child of a single mother, her life in the family’s hotel includes many situations not usually encountered by most children. The subjects of prostitution, bootlegging, abortion, child abuse, suicide, and even murder are described from the perspective of a young girl growing up in an adult’s world.

Darline’s love for horses and skill in riding, forms a thread that weaves through her story. Her earliest memories are about horses, and much of her life involves riding, rodeoing, and ranching. Tales of life on her aunt’s ranch reflect a time that has long passed yet is still being played out today in rodeo arenas across the country. Her ranch adventures include descriptions of how the work is done, and how she, as a young girl, adapts to become one of the ranch hands and, later, brings those skills back to the rodeo arenas in which she competes. The details of how her family cam

Donna Morris Stephens was born and grew up in Oklahoma in the 1940s and 1950s where her father was an Oklahoma Highway Patrolman. She received a Bachelor’s Degree from Oklahoma State University and a Master’s Degree and Doctor of Philosophy Degree from the University of Maryland, College Park in areas of education. After working over thirty years as a teacher and administrator, she retired to write the stories of people and the times in which they live.