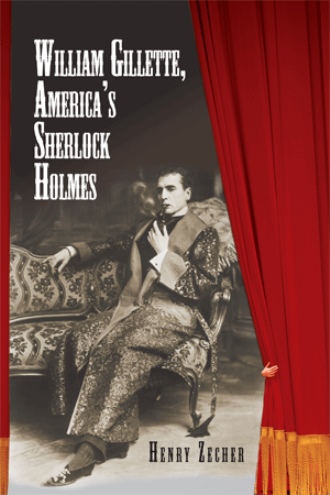 William Gillette is best-remembered today as the living personification of Sherlock Holmes, but he was much more than that. He was one of the nineteenth century’s greatest stars, among its most successful actors and playwrights. In a career spanning six decades, he was one of the best-known celebrities in the Western world, a towering figure in an age of towering figures. Among his friends were Mark Twain, Sir Arthur Conan Doyle, Theodore Roosevelt, Harriet Beecher Stowe, Thomas Nast and Maurice Barrymore. He built a castle on the Connecticut River and a miniature railroad to run around it. Among the guests who rode on that train were President Calvin Coolidge, physicist Albert Einstein and Tokyo Mayor Ozaki Yukio, who gave to America the cherry blossoms in 1912. James M. Barrie, the creator of Peter Pan, wrote two hit plays for which he specifically asked Gillette to star in.

As a playwright, Gillette was known for the stark realism of his sets, costuming, dialogue and actions. He developed realistic and dramatic lighting and sound effects. As an actor, he developed the philosophy of The Illusion of the First Time, in which an actor speaks his lines and moves about each night, not as he has done a hundred times before, but as if he is making up his dialogue as he goes along, and moving about as if doing so for the first time, as real people do. Gillette's intention was to reproduce as much as possible the real world on stage, to make his audiences believe they were seeing a life episode being lived across the barrier of the footlights.

This magnificent biography is the first full treatment of Gillette ever published. Exhaustively researched, thoroughly documented, and beautifully written, it not only details the life of this extraordinary man, it provides a colorful context of the times in which he lived. This is a major part of the history of the Western theater finally documented for our edification and enjoyment.

Former journalist and Federal government human resources specialist Henry Zecher is now a freelance writer specializing in historical subjects. Two leading works were an evaluation of German Reformer Martin Luther’s impact on the English Bible (published in Christianity Today Magazine, October 23, 1983, republished several more times, recorded for the blind, and fi nally included in Christian History Magazine’s special Martin Luther issue), and the fi rst analysis from a biblical and historical point of view of the Papyrus Ipuwer, claimed by many to have been an Egyptian version of the plagues on Egypt described in the Old Testament Book of Exodus (The Velikovskian, A Journal of Myth, History and Science, Vol. III, No. 1, January 1997). His wife, Gay Zurich Zecher, is the founder and president of Art & Soul, Inc., producing personalized water color cartoons and selling scented candles. They live in Waukesha, Wisconsin, and between them have fi ve children, three grandchildren, a cat and a fl uctuating number of grand-pets. Read other published works on Henry’s website at