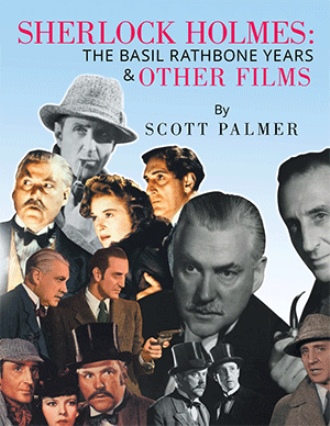 For more than 100 years, the character of Sherlock Holmes has appeared in scores of films, as well as in a number of television series. For many people, the films made between 1939 and 1946, starring Basil Rathbone as Holmes, with Nigel Bruce as his companion Dr. Watson, remain the most popular. My own introduction to these films began as a small boy, viewing them on television with my father, who had himself seen them all as a boy or very young adult. Rathbone’s portrayal of Holmes seems to me the most accurate, in the regard of following the way Sir Arthur Conan Doyle wrote the character, and each of the fourteen films he made playing Holmes have many charming characters and great dialogue. Most of the stories have some elements of Doyle’s written works; even the “updating” where Holmes fights the Nazis, for example, is still great entertainment. Although there are a number of Sherlock Holmes film books, there has never been one devoted to the Rathbone series, in detail. In this book you will find complete cast lists for each film, along with a story synopsis and photographs. There have been so many other film and TV adaptations of Sherlock Holmes adventures that I feel it necessary to include a number of others as well, even though the emphasis of the book is still on the Rathbone series. I have included several films from the thirties, i.e. four films starring Arthur Wontner as Holmes (The 1932 film The Missing Rembrandt appears to be a lost film) and also the 1931 Raymond Massey The Speckled Band, along with the 1932 Sherlock Holmes with Clive Brook, and the 1933 film A Study in Scarlet starring Reginald Owen. Following the Rathbone films a number of other actors have played Holmes, most notably Peter Cushing in the 1959 film Hound of the Baskervilles and a 1968 TV series. I have included one film each from the 1954-55 series starring Ronald Howard, one from the 1968 Cushing series and one from the series starring Jeremy Brett. Other notable films include The 1965 A Study in Terror and the 1979 Murder By Decree, both pitting Holmes against Jack the Ripper. I have included five or six others at random, starring actors like Stewart Granger, Ian Richardson, Charlton Heston, Roger Moore and Christopher Lee. There is also a section at the back with a photo from films made beginning in 1899.

Scott Palmer is a native of San Diego, and a graduate of San Diego State University. He has worked for the Hollywood Film Archive in Los Angeles, ans was the Managing Director of the California Performing Arts Centre in San Diego. He has appeared on radio, TV, and has written newspaper and magazine articles. With an extensive knowledge in the are of films and TV, he has also published books including A Who's Who of British Film Actors, British Film Actors' Credits 1895-1987, Australian & New Zealand Film Actors, Jack the Ripper: A Reference Guide, and The Films of Agatha Christie. He resides in San Diego, California.