A migration journey from the South to Chicago 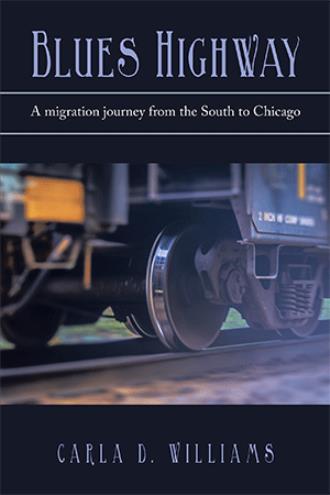 “The steam rising from the engine car cut through the glimmer of the harvest moon, shooting a halo around the dark-hued man rushing toward the cook’s car. He was hopping over rows of tracks to reach the train door where Sidney spied him from a narrow window. Not wanting to draw any attention, Sidney slid toward the freezer in the back of the carriage without looking to see if anyone took pause. Opening the freezer door, he quickly tucked a package of fatback, another of beef spare ribs, and a pork shoulder butt under his arms. Mist surged into the boiling car, as freezer fog collided with the heat boiling in the setting sun. He packed the meat into a pouch, and just as the stranger's footfalls reached his ears, Sidney tossed the pouch toward the rear door. An envelope with one hundred dollars, counted out in tens and twenties, hit the bottom stair where Sidney picked it up. He would keep more than half the dough and give the conductor his share for looking the other way. The Pullman conductor was similar to the overseer on the old plantations. He knew the conductor could shut down his livelihood as a white man in charge, but like any man, he had a price. On the envelope, Sidney noticed the New Orleans address where he would meet Uncle Charles and this new bagman, who, Sidney learned in a handwritten note, was called Frank King. A few days later in New Orleans, Sidney found himself weaving through the jumbled streets off Esplanade, a stone’s throw from City Park. He wanted to pause and slide through the richer stretch of Esplanade, where the old Creole elites sat in their lavish homes. He wanted to drift toward Lake Pontchartrain and stroll nearer to the mist of the Mississippi River, keep on walking until he found his way to Treme and a good fried chicken dinner. But he had business. At last, he came to Paradise Den, the jump blues bar with its juke box wedged by the back pool table. Sidney crammed into one of eight cushioned high chairs at the bar. He nodded to the barman, ordered a beer and a shot, then asked if Uncle Charles was in. The barman, Joe Smalls, took notice of the burnt red shade on his forehead and the small nicks near his thumb and forefinger that revealed Sidney's labor with peelers and knives. Though he wore no hat, the starched pressed white of his shirt fell neatly toward the trousers, where Joe spied the belt clasp required by Pullman. Joe saw in the sway and balance of Sidney’s stride a train at full throttle. His broad back rose straight into his neck, making him look like a linebacker. Sidney could pass for a Congo Square mulatto. Something about the cut of his trousers and the subtle part in his wavy hair made him seem part Yankee. Joe worked as the barkeeper after injuring his back working on the docks. His strong arms became a reliable tool for Uncle Charles’ money-loaning operations before his injury, and his loyalty was rewarded with a recurring slot at the bar, which led to him helping to bring a mixed clientele to Paradise Den. Long accustomed to late hours’ labor, he’d grown up on the waterfront and could apply unique abilities in confronting racist white thugs who might try to stir things up. The streets wove parallel to the Mississippi River, from Tchoupitoulas above Canal Street to the French Quarter, lined with seaman's bars and juke joints to cater for non-stop work at the port of New Orleans. Paradise Den was a recent hotspot, known for party girls, bands and colorful people of all sorts. When Sidney walked in, Paradise Den looked built for pleasure. He glanced just a minute, taking the place in. It was too early for the day workers and stevedores who would flood the joint later. The bar wound around into a cedar arc toward the edge of a patch of light dropped from a ceiling bulb, which gave off just enough of a shine to read the jukebox. He picked up the smell of blood cracked hands on glasses of scotch, cigarette butts, eau-de-vie and fried fish. At first glance of Uncle Charles, Sidney was afraid of him. He’d nearly forgotten his face. Perhaps, it was because he was unused to the looks of a man who had killed someone. The older man's gaze was fearless, nothing like people he'd grown up with, who stepped off the curb when a white man came near and averted their eyes around their women. Uncle Charles’ eyes looked right through you, like he already knew what to do with you. His face was as dark as the sharp notes on a piano, disrupted only by a long vertical scar glistening from his temple toward his chin. Someone had taken a knife to him. From the looks of it, the attack hadn't paid off. The story that his Uncle John told him was that Uncle Charles started out a porter for Pullman back before World War I. He’d moved off the rails after defending one of his regular customers, some Italian guy hooked up with the policy game in New Orleans and backed by the New York mob. That’s how Uncle Charles got to be a runner. He’d saved that made man’s life on the train. His big tipper picked him off the floor, took him to get stitched by a doctor and brought him into the policy game, small bets only.

Blues Highway is one migration story of Blacks from the American South, aided initially by the Pullman porters broad reach into the world beyond. Moving on to the next generation, the porter Sidney sets up his daughter Janet to take hold of his barber shop. As she navigates her life, opportunities and social conditions shift. The power of Janet and Frank's relationship moves the saga forward, touching honestly and deeply on the forces of change. In the end, Janet's move to Atlanta illustrates the return of many African Americans to 'the New South,' where an educated middle class finds success. Blues Highway reclaims the impact of Pullman porters in shaping the black migrations, filled with richness and truths, emotion, love and loss. An early manuscript was recognized as a semi-finalist for the Inaugural Tuscarora Prize in historical fiction in 2019.

Carla D. Williams began writing as a teenager in Chicago and later became a newspaper editor and Humanities educator. As a fellow in the Bay Area Writing Project Summer Institute 2010, she produced memoir, fiction, poetry and more. History, travel, sports, politics, and raising her two boys have fed her imagination and dreams. Her fiction and poetry have appeared in e-zines Digital Paper, Poetry Express, Dillydoun Review and elsewhere. She is part of Datura Writer’s Collective in Oakland and developed this novel with support from Marlene Connor Lynch Literary.