The New Covenant on Trial

Examining the Evidence for a Replacement Covenant 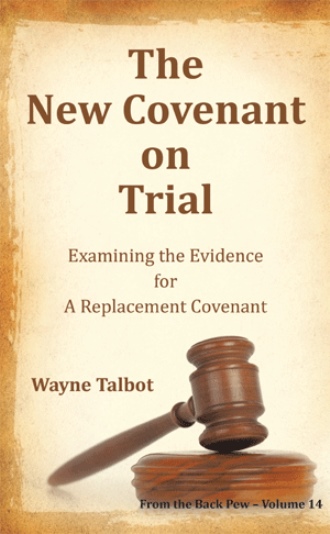 “Does not wisdom cry out, and understanding lift up her voice?” (Proverbs 8:1) Christianity accepts as fact that the Messiah announced a New (Replacement) Covenant at the Last Supper. What I find particularly curious is that Yeshua had little to say on the subject, unlike earlier covenant announcements in the Old Testament. Even more, his disciples there present were not in the least curious about how this new agreement interacted with, or differed from, the tenets to which they and their forefathers had long held. Putting aside for the moment, the actual words that the Messiah may have used, and what he intended to convey, how did his Apostles react? Well, from the text, they hardly noticed: “When they had sung a hymn, they went out to the Mount of Olives” (Matt 26:30). I find this most perplexing. Imagine that you were a Catholic priest of long standing and were invited by the Pope to celebrate Easter at the Vatican. Toward the end of the meal, the Pope announces that despite the traditions of the past, he has decided that the Papacy no longer represents the Vicar of Christ on earth, and that all that has gone before has now been rescinded. Would you: (a) sing a hymn and go out into the garden; or (b) demand to know what he was on about, never having had even a hint of this before? You see, we must view the Apostles as real people. Numerous times in the Gospels they react to the Messiah’s words, expressing their lack of understanding, and even arguing amongst themselves. But here, perhaps the most momentous event in Christian theology bound inextricably with the Crucifixion and Resurrection, the Apostles hardly noticed at all. Why no request for clarification? One possibility is that this new covenant had previously been explained to them, but why do we have no evidence in the Gospels? The most likely explanation for their lack of reaction is that their understanding of the Messiah’s words was not as Christianity teaches. So now, put yourself in the sandals of these Torah observant Jews who had been following their sinless, Torah-observant Master for three years, gradually coming to the understanding that the words from His mouth were those authorised by the God of their fathers, the very same God who made certain promises to Abraham, Isaac, and Joseph, and with whom was made, the covenant under which they had lived for nigh on thirteen hundred years. With nary a hint of any new agreement between God and themselves, they sat with their Master for the traditional Passover meal, the God-ordained commemoration of their rescue from the slavery of Egypt. The gathering was filled with tension because they had been forewarned that he would soon be taken out and crucified (Matt 26:2). One of them would betray Him (Matt 26:24) - but who? Then out of the blue and with no explanation, He announces a new covenant: how would you have reacted? I would have been jumping up and down wanting to know what it was all about, but according to the Gospels, they did nothing of the sort, going out to the Mount of Olives (Mark 14:26) as if nothing significant had happened. This narrative just does not ring true to me. For nearly nineteen centuries, Western Christianity has placed emphasis on the announcement of this replacement covenant that the original Apostles hardly noticed, and the Apostle John thought of unworthy of inclusion in his Gospel. The Jews saw themselves as covenant people, the chosen of God. The covenant that God made with Abraham, and the covenant that they signed onto at Sinai, were the central tenets of their worldview. How could a new covenant that Christians assert is the centre of their theological worldview, one that replaces historical Israel with a New Israel, entirely escape the attention of the Messiah’s disciples? According to the Book of Acts, and the various Epistles, such a new, replacement covenant was never preached. Why do we have no Scriptural evidence that it was preached, if it was? If this supposed New Israel was granted authority to abandon Torah, replace the traditional Sabbath, and ignore the periodic commemorations ordained by God, where is the evidence? Something is very wrong with this picture. This study pursues four lines of enquiry: 1. The actual words used by the Messiah at the Last Supper. 2. The evidence that the Apostles, including Sha’ul, ever preached a new, replacement covenant. 3. How to understand the quoting of Jeremiah 31 in Hebrews 8; and 4. How Replacement Theology developed and took hold in the early Church of Rome. As far as is humanly possible, we will look at the evidence objectively, much as one should do when sitting on a jury. I have already judged the case, as you would expect, and so I will leave you to conclude for yourselves, as only you can be responsible for your own beliefs, and how you live in accordance with those beliefs, be they true or false.

What if Replacement Theology, as has been taught in Christian circles for nearly two millennia is, in fact, a Christian myth? What if the doctrine developed by the Church of Rome in those early years was built not in concert with what was taught by the Jewish Apostles but in opposition by the Gentile converts? What if Paul’s attempts to make sense of how the new era in Christ could be explained to both Jew and Gentile, whilst allowing each to remain as called, was subsequently misinterpreted? What if the middle wall of separation that the Messiah sought to tear down was put back up again as a result of a schism between the Gentile and the Jew, with neither party quite getting it right? Putting the new covenant on trial, the author seeks to understand how the long-standing cultural differences between Jew and Gentile led to not simply a new covenant but to a replacement covenant. Paul taught inclusion theology, the Gentile joining with the Jew, being nourished from the original vine. For centuries, the Jews had excluded the Gentiles unless they agreed to become proselytes, non-Jewish Jews in a religious sense. Eventually with the centre of the religion moving from Jerusalem to Rome, and Hebraic thought patterns replaced with the Hellenic thought patterns of the now majority Gentile congregation, inclusion theology was turned on its head. Replacement theology became exclusion theology for Jews, and the iron hand of Rome began the persecutions that have existed to this day. This sounds like fiction, but it is not. It is not an untold story, but is seldom heard from the perspective of Christian doctrine. This book seeks to provide the evidence that the Church of Rome strayed from the way of the Messiah and has taught others to do the same.

Raised as a Catholic, Wayne Talbot has, in recent years, undertaken to study scripture from beginning to end, putting aside all theological presuppositions. He has studied the works of Christian, Messianic Jewish, and Orthodox Jewish authors, with a view to obtaining the broadest possible view of the competing theologies. Using his experience as a former commercial analyst to objectively evaluate the various claims and counterclaims, he has sought to understand the foundational suppositions on which these theologies rely. Consequently, he has revised his understanding, in particular the writings in the New Testament. Today, he owes allegiance to no Christian denomination, describing his theological view as that of a Messianic God-fearing Gentile Zionist. He accepts the continuing place of historical Israel in God’s plans and accepts the salvific accomplishments of the Messiah, but not the Christian claims of a Replacement Covenant and the attendant doctrine and theology. Though a late starter in the literary field, Wayne Talbot has published a novel, Finding the Shepherd, a pseudobiographical account that alludes to his own theological wanderings against a background of places he has been but of entirely fictional people and events. He has published a refutation of Richard Dawkins’ Greatest Show on Earth, entitled The Dawkins Deficiency, and an entirely original treatise, Information, Knowledge, Evolution, and Self, which contends that the posited mechanisms of evolution are insufficient to account for the cognitive information and knowledge in humans. In between, he has written thirteen Bible study books, From the Back Pew. Further details can be found on his website, www.peshatbooks.com This, the fourteenth in the series, is the first to be published professionally.