by B. J. Freedman 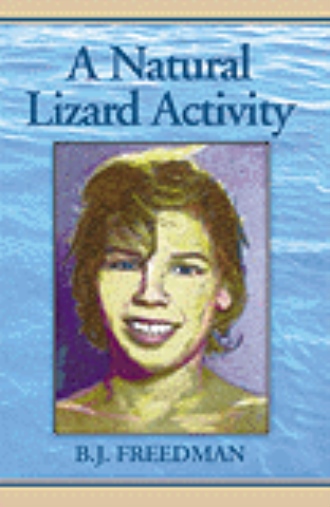 A Natural Lizard Activity has become a favorite of readers interested in gay youth. Set in the California counterculture of the early 1980s, A Natural Lizard Activity depicts the inner and outer world of the young narrator, 13-year-old Kim, a beautiful, personable, sexually insatiable boy, who tells his tale with sharp observation and deadpan humor. After a psychedelic childhood spent wandering from Mendocino to Mexico, Kim seduces the level-headed Bernie, and soon moves in with "the short guy."

Their easygoing relationship and deepening love is strained when Kims loony but lovable father trips out down his mushroom-paved "Golden Road." Kim enlists Bernie in his search for the old man  and something more. This new edition has been revised by the author.

"The narrators empathy, intellectual brilliance, flair for poetic imagery, and sense of humor make each page of this remarkable novel sparkle."  Robert Rockwood

A Natural Lizard Activity is the first in a series of novels and short story collections to be published by Little Acorn Press.

B.J. Freedman is currently at work on a book of short stories and a novel, The Body of a Ten-Year-Old, to be published sometime before the millennium by Little Acorn Press.

B.J. Freedman is the Director of the Andre Gide Memorial Oasis in Biskra, Algeria.