Primer To Not On The Map! 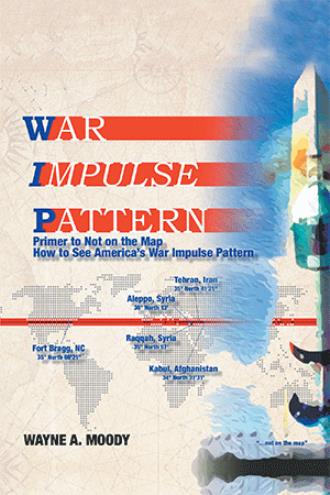 Astrology provides intelligence to forecast and plan our actions in all manner of day-to-day concerns and I believe that major collective concerns, like seasons in the economy and war, benefit from the same treatment. I am an astrologer who has practiced Mundane astrology, the astrology of countries and their leaders, for three decades. This book has deep roots. Purposeful action towards a book began with an interview published February-March 2014 in the Dartmouth Alumni Magazine. During that interview, I pointed to specific Earth geography 35° North latitude/50° East longitude, where the U.S. would face major concerns up through 2022, when events peak for U.S. foreign interests. A look at a map of these map coordinates and knowledge of the recent history of American focus on the region, since my Dartmouth interview, speaks volumes. My project introduces an astrologically derived pattern, which I discovered and named a "War Impulse Pattern" (WIP) in 2014. This International WIP pattern has eighteen astrologically determined branches, some major, others minor. I unpack the logic of my WIP branches and lay them out in map form. Within designated zones of the branches of the WIP, I make the case, that all the major U.S. military conflicts, from 1776 to 2018, have been fought on geography marked by the WIP. Furthermore, in addition to accurately forecasting where events will occur, the three planets making up the WIP serve as timekeepers for when U.S. military forces will deploy. I have applied my innovations with Astro*Carto*Graphy®, a lens of relocation astrology, to banks, hurricanes, man-made disasters, national security and war. My research journey over the past 4 years has lead me from one surprise to another. For example, I have discovered that the entire U.S. Global Positioning Satellite (GPS) structure, a critical component of modern U.S. warfare, was set up within the WIP branches, some mere specks of land in the middle of vast oceans. This first of three books, prepares the WIP. Book Two, now in the final stages, gives chronological, compelling examples of U.S. wars from 1776 to 2018, noting that the battlefields aligned to the WIP and were susceptible to astrological timing. My vision for Book Three is an over-sized book of annotated and creatively presented maps supporting creative thinking and exercising the reader’s spatial intelligence. I offer this War Impulse Pattern (WIP) – Primer to Not on the Map book for those seeking a more sophisticated understanding of America at war. I offer practical, but strategic intelligence 'not on the map' of orthodox views of reality. How and why the WIP works is demonstrated. Most of the facts of the WIP are grounded in mainstream understanding. While I have taken years to prepare these books, the need for the WIP intelligence is urgent. A look at what's been happening all along 35° North, a belt wrapped around the Earth sweeping today’s conflict zones in Syria, Iraq, Iran (particularly Tehran near 50° East), Kurdistan, Afghanistan, Pakistan, China, Korea, and Japan reveal that my WIP lens has been brought to a sharp focus – to mastery.