This Is Not An Assault

Penetrating the Web of Official Lies Regarding the Waco Incident 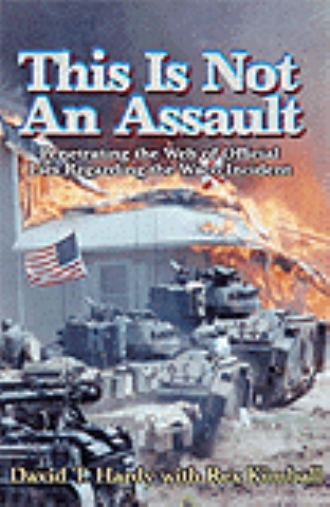 "A new book by former federal attorney David Hardy further batters the government´s Waco fairy tale. "This Is Not An Assault" provides fascinating inside details on how private investigators squeezed out damning information on Waco -- how federal judge Walter Smith stifled lawyers at the trial last year to prevent jurors from learning of over a hundred items of evidence embarrassing to, or potentially incriminating, the federal government -- and how Republican congressmen (such as Dan Burton) and aidescowered and effectively aided the Clinton administration cover-up. Hardy´s skill in hammering federal agencies with Freedom of Information Act requests was a decisive factor in making Waco a hot political potato in 1999."

In February, 1993, a gun battle erupted outside Waco, Texas, as federal agents attempted to search the communal residence of a religion known as the "Branch Davidians," led by a David Koresh. The battle, and the following siege, was the greatest law enforcement debacle in American history. The taking of a wooden building, largely filled with women and children, cost the lives of four agents and nearly nearly ninety civilians.

For years the Waco issue seemed dead--as dead as the people who died there.

Then in 1999, the Waco issue exploded, with proof that the Federal agencies had lied to their own leadership, to Congress, and to the courts. The Attorney General herself proclaimed that she had been deceived. U.S. Marshals searched FBI headquarters in an unprecedent move, uncovering videotapes that supposedly did not exist. An Assistant U.S. Attorney was indicted.

The turnaround was not brought about by political institutions, media, or any other traditional powerbase. It was caused by three individuals -- an insurance salesman turned documentary maker, an attorney practicing solo, and an eccentric "spook" with sources in the intelligence community.

"This Is Not An Assault" explores this remarkable turnabout. It is authored by someone who saw it from the inside, a former government attorney whose lawsuit forced government agencies to divulge the incriminating documents and tapes, and who debated and cornered FBI´s spokeman on Nightline the night before Attorney General appointed a Special Counsel.

The evidence was startling. We now know, from the ATF´s and FBI´s own files, that:

David Koresh could easily have been arrested without bloodshed. Nine days before the raid and gun battle, he went shooting with two ATF undercover agents. He was unarmed until one of the agents loaned him a pistol. The ATF daily report discussing the event is reprinted in the book.

The opportunity for a peaceful and bloodless arrest was passed over precisely because the agency needed a spectacular raid to divert attention from internal scandals. The agency organized a visually impressive paramilitary raid as a manner of stage production. The raid went in in broad daylight; many agents did not bother to bring spare ammunition; the snipers donned elaborate camouflage, but were dropped off, in daylight, by a white Bronco.

Immediately after the raid, efforts were made to destroy all the evidence that might indicate who had begun the battle. The agency explained that every one of the three or four videocameras facing the front of the building had malfunctioned, and the only still camera was (according to an ATF affidavit) stolen from a table in room full of Federal agents.

Using tapes of ATF radio traffic (obtained only after a year´s court battle) and tapes of 911 calls from the Davidians, we can reconstruct the entire fight from both sides. From the first minute of the gunfight, Davidians were

David T. Hardy is an attorney and a legal scholar. He holds a B.A. and Juris Doctorate from the University of Arizona, where he served as Associate Editor of the Arizona Law Review, a fellow of the Instiute for Humane Studies, and was given the ABA's Lewis M. Powell medallion for excellence in appellate advocacy. Mr. Hardy is the author of three books, portions of six anthologies, and thirteen law review articles. His writings on Federal firearms laws have been cited as authority by the U.S. Supreme Court and ten of the thirteen U.S. Courts of Appeals. He has testified before two Senate committees conducting oversight of the Bureau of Alcohol, Tobacco, and Firearms. Mr. Hardy spent eight years as a Federal agency attorney, representing the U.S. Department of the Interior and the Federal Deposit Insurance Corporation. Before and after his federal service, he practiced law in Tucson, Arizona.