Time Has Made A Change in Me

Growing Up in Alabama 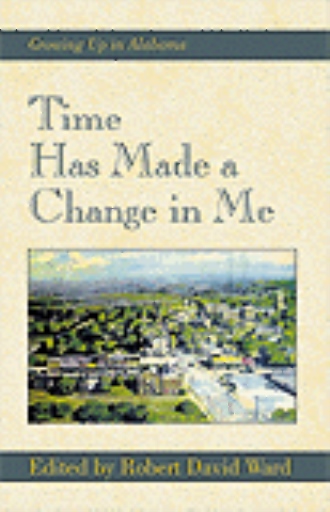 Not all acts of creation begin with an idea narrowly pursued to its logical end.  Cause and consequence are difficult to keep in balance and we sometimes produce more than we intended. The minor act of this book proceeded along a planned route that produced both the expected and the unexpected. With the friends of childhood growing old around us, it seemed plain to all that we were entering the last act of living (a long act, we trust), and if there was any summation that we wished to make this was an admirable time to do it.

Very few of us live in the town in which we were born, but the influence of that town still lives within us.  Time suggests that, depressions and war included, we had a different childhood from so many others, and that an account of those early years might be tremendous entertainment for our group.  We would not force others to sit through the tedium of our verbal slide show, although we welcomed any who cared to look.

So the rosters of childhood were studied and we sought to contact our old friends with pleas for contributions.  We were far more successful than we had any right to be, and Time Has Made a Change in Me offers the reminiscences and the essays of our town and our time. Our oldest contributor at the age of 96 begins the story with her coming of age in the 1920s, while our youngest (and they are in their sixties) recount living the years of childhood in a time of devastating national and international events.  Although these outside forces affected us, we lived within the reference of our town and its inhabitants. We knew of other worlds but our horizons were limited.

Montevallo, Alabama offered a curious cultural mixing of social elements.  The town sits almost exactly on the southern edge of the mineral belt, the source of the iron and coal that helped to fuel the ambitions of the New South.  Our geographical anomaly was well illustrated by the fact that Montevallo was an area of rocks and red clay, while only miles to the south there were sandy soils and peach tree orchards. We had our small farmers trying to make a living on marginal cotton lands  and our stories recount cases where families left the farm and moved to town to find a source of livelihood.

And then the college came.  The Alabama College for Women was never very large in our day, but its influence on the town was pervasive.  It meant that hundreds and hundreds of young ladies shared our space, and a hard cadre of professors raised our level of social and educational expectations. Sometimes this produced two levels of society, each suspicious of the other, at other times a social mixing occurred much like what happened in the army under Selective Service.  All of this gave a new dimension to our lives: a broader view and a more tolerant attitude was usually the end result.

When we put all these pieces together (from over thirty contributors) we discovered that we had produced exactly what we meant to  and something else that we had not planned to do at all.  While we wrote of a little town turned inward on itself, we wrote as well on the universal theme than transcends space and time. Everywhere and at all times little children go through the process in which consciousness is imprinted with the values and views that make us what we are.  In this sense all can appreciate this account and it will have all readers remembering and considering their own childhood and its influence and effect.

This book is fun to read not simply for the adventures and misconceptions of the youthful mind, but for the intense personal view that the writers bring to their subject. We see through their eyes and we can remember the innocence that very slowly evaporated as we adopted the guise of maturity.  All of this is age looking at youth and it is about as far as we can go to see our lives in their total perspective.

Robert David Ward is Professor Emeritus of History at Georgia Southern University where he taught for thirty-one years. He received his doctorate from the University of North Carolina at Chapel Hill. He was born in Montevallo, Alabama, a town he celebrates in this book and in his earlier Lamar and Me, the story of two boys growing up in a little Southern town in the 1930s and 40s. Dr. Ward is the author or co-author of several books, including the authoritative Alabama; The History of a Deep South State. He lives in Statesboro, Georgia with his wife and son – and his two research cats who want to investigate everything.