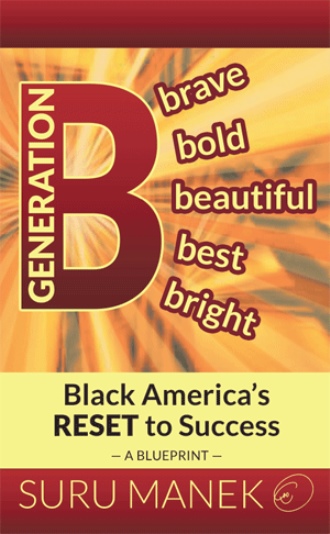 Are You Tired of Being Victimized by Racism? Generation B gives real solutions to bring success to Black America Black America suffers. Poverty. Babies with no fathers. Illiteracy. Crime rates through the roof. There are many cry "racism" as the problem, but how many offer solutions that work? A homeless black man said it best, "success is the best revenge." But how can a whole segment of America's population find success when it is so beaten down? Generation B: Black America's Reset to Success offers a revolutionary solution to the problems Black America faces. Author Suru Manek learned to stand up to racism and discrimination in colonial Africa and found fantastic success in America. But he never liked the ever-widening chasm of racial inequality America exhibits. He wondered--what would happen if African Americans applied a cultural blueprint similar to his own? Generation B: Black America's Reset to Success is the result. Discover the magic mix of cultural elements that can bring success to even the most oppressed. Racism exists in America, but you do not need to become a victim to it. Generation B offers a solution for Black America, one which African Americans everywhere are invited to participate. For real change will only happen when black communities across America decide to reset themselves as a culture and change from within.

Suru Manek was born in 1946 in OL’Kalou, Kenya, Africa, a remote village surrounded by African jungles. However, he was part of a community that had come to Africa from India to work the British railroad system. His father and uncles controlled the retail trade in that part of Kenya until Kenya declared its independence from Great Britain in 1963. Because the village overlord did not believe that the Gujarati children should be educated, Manek had a poor elementary education and flunked his examination to get into high school. His brother bribed the overlord, and he was allowed to take the examination again. Manek graduated second overall from Menengai High School in 1961 and worked at his father’s store until 1969, when he met a Peace Corps volunteer who encouraged him to apply for college in the United States. His father’s advice: “Son, while in America, please be true to our culture—Gujarati. And also, become an entrepreneur. Sell peanuts on the street if you have to but be an independent businessman.” His father passed away in 1968, one year prior to Manek immigrating to America. Upon graduation from Central Michigan University, Manek worked for Meryl Lynch in Cleveland, Ohio, as a stockbroker and was very successful. He then received his MBA from the University of Toledo, and worked for Kyser Industrial Group marketing machine tools internationally, but his entrepreneurial upbringing never left him. In 1985, he published Scholarships for International Students that indexed over $200 million in scholarship money for international students. He started his own business in 1976 in his apartment and is now respected internationally. He owns property, including a large reception hall that is used by many Gujarati in the Los Angeles area. He has held the presidency of the Lohana Community for the past twelve years; his chapter was named the 2014 Lohana Organization of the year by the international governing body, the Shri Lohana Mahaparishad. Manek was also named the 2014 Raghuvanshi, the International Lohana Person of the Year, for giving back to his community in the fields of religion, health care, and education and for the care of women and children in the Los Angeles area. Coming from abject poverty, enduring severe racial discrimination common under British colonial rule, Manek has not just survived but thrived. Now the owner of a very prosperous export-oriented business based out of California, he is proud to call America home and is dedicated to teaching the downtrodden to succeed in abundance with the principles of his ancestors, the Gujaratis of India.