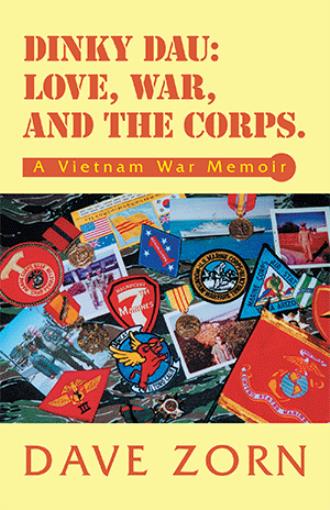 Dinky Dau is Vietnam slang for “you are crazy.”

DINKY DAU: Love, War and the Corps is the author’s personal collection of crazy stories from a crazy war and a sometimes-crazy life in the Marine Corps.

It was early 1964, the British Invasion by The Beatles had just begun when Dave Zorn decided to drop out of college and join the Marine Corps with a friend. It was the beginning of a wild, three-year ride that included a tour of duty with one of the first combat units sent to fight in the Vietnam War. It was a time when patriotism was still popular—before the draft, the drugs, and the discord.

Dinky Dau: Love, War and the Corps is a tale of survival from enemy fire on the ground and in the air, to dysentery and a berserk Army doctor, to torrential monsoon rains and searing jungle heat, and nightmarish animals, insects, rodents and reptiles. It is also the story of two young lovers who, though separated by war, were reunited by a death decades later.  Woven throughout the action is the story of friendships made during war and how they endure through the decades.

Dave Zorn is an award winning broadcast journalist and a former member of the Marine Corps Combat Correspondents Association. Dave was born in Lebanon, Missouri and spent his early childhood in Milford, Connecticut. The family spent several years in rural Somerset, Pennsylvania and Berea, Ohio before settling in Phoenix, Arizona where Dave attended West High School. He graduated from Phoenix College in 1969 majoring in broadcasting. His radio news career spans more than thirty years working for KOY-AM, KPHO-AM, KPHX-AM, and KTAR-AM in Phoenix, and WWJ-AM in Detroit. In 1981 Dave joined KNX-AM in Los Angeles where he was a news anchor and reporter for nearly 25 years retiring in 2006. Dave married his college sweetheart, Carolynn, on New Year’s Eve, 1995. They have five children by previous marriages: David, John, Christine, Jolie, and Robert; and nine grandchildren: Erik, Laura, Thomas, Andrew, Natalie, Mena, Ethan, and Nola. Dave and Carolynn Zorn live the Phoenix area where Dave is currently working on a book of short stories.