by by The Mills 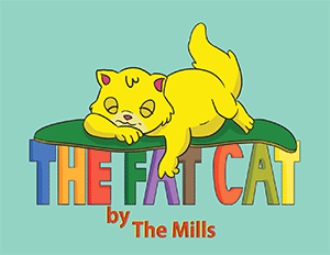 The fat cat always sat on his mat And there he slept, ate, and sat Until one day his friend Pat Came to have a small chat In this story you will meet the fat cat, despite his friends calling him out to play he would much rather sit on his mat all day. But what happens when his friend pretty Pat comes around for a chat? In this delightfully illustrated book written in rhyme, children willleap into reading and writing with fun activities exercising the use of sounds using the phoneme family such as “at, “mat” or “cat”, with plenty of coloring pages to color in as many pink cats, orange cats, and purple cats as they want, along withenlightening timeless, high moral principles such as friendship, compassion, critical thinking, healthy habits, personal discipline, courage, and self-esteem. All in poem and beaming with smiles,Ralph and Belen Mills invigorating children’s story book The Fat Cat is a perfect gift “to all the young children of the world, their parents, grandparents, mentors, and caregivers.”The Fat Cat also helpschildren recognize words and sounds, and brilliantly spark their spirit of adventure in the joyand pleasure of learning.

Ralph Ainslee Mills was a retired Professor at Valdosta State College, now Valdosta State University. He graduated at Indiana University, Bloomington, with an M.A. in Economics, and B.S. in Business Administration. His teaching experiences include Valdosta State University, University of Georgia, West Georgia College, and Hawaii Pacific University. Ralph was born in Jesup, Georgia; he was very proud of his family’s British and Irish heritage. He served his country honorably in the U.S. Air Force intelligence unit. He later worked as Departmental Program Analyst for the Florida House Appropriations Committee and Chief of Planning and Budgeting for a Bureau of Florida Department of Natural Resources. He was a linguist; spoke Spanish, Greek, and Bulgarian. He founded the Collantes-Mills Corporation in partnership with his wife, and was a business owner of an amusement center in Panama City, Florida. His business acumen and experience resulted in other ventures that benefited the community. He started the first Oriental Grocery store in Tallahassee, Florida. Ralph, co-authored with Belen Mills, a book, “Designing Instructional Strategies for Young Children”, and a chapter, “A Critical Analysis of the Concept of Accountability”, and The Magic Letter Factory, an award winning pre-school program. He was a member of the American Mensa organization, and a gifted, accomplished pianist and composer. He composed “Wildlife Is Everybody’s Business” performed by the Symphony of the Americas in Ft. Lauderdale, Florida, an organization that honors individuals who made significant contributions to their community. His business and professional memberships include American Economic Associations, Southern Economic Association, Panama City, Florida Chamber of Commerce, and Hawaii Associations for Staff, Program, and Organization Development. Belen Collantes Mills is a Professor Emerita at Florida State University, Tallahassee, specializing in Early Childhood Education Curriculum, Instruction, and parent-child relationships. Dr. Mills was a Smith-Mundt/ Fulbright scholar, earned her M.S. in Education and Ed.D. Degree from Indiana University, Bloomington. She was a kindergarten and elementary school teacher. She authored books in Early Childhood Education as well as co-authored dozens of research studies in professional journals that were recognized by various national and international media outlets. She was a speaker at professional conventions, conducted workshops, and served as a consultant to educational institutions. She was a member of the National Association for the Education of Young Children, World Council for Curriculum and Instruction, and Association of Early Childhood International. Notable recognitions include Community Leaders and Noteworthy Americans, Who’s Who in American Education, and Who’s Who in the World. She co-authored with Ralph Mills, her late husband, a pre-school software, The Magic Letter Factory, which won two national awards “Parent’s Choice,” and “The Coalition for Quality Children’s’ Media.” At FSU, she started the Early Childhood Education Program, and subsequently initiated the study abroad program in London, England for its majors. She was born in the Philippines; her mother was Filipino and her father from Spain. Her other passion is dance. She choreographed and performed Filipino folk dances to ballet, and modern dance, example: “My Foolish Heart,” and “The Dance of Lights.” She met Ralph when they were students at Indiana University. With mutual love, trust, and respect their lifelong partnership of sixty years, broke the barriers of race and religion. They have two children and three grandchildren. Dr. Mills has been a pioneer in Early Childhood Education and her passion is transparent in her work.