THE LAST OF MY MANY FRIENDSHIPS

by Rev. Msgr. Francis A. Galles 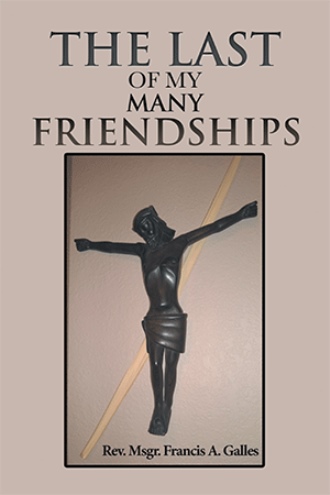 If Jesus had lived to my age (90 years) I think he might have written his autobiography. Unfortunately, however, he was killed by those he had come to save. Fortunately four of his disciples wrote up the story of his life, and gave us the four Gospels which are a marvelous account of his life and his teaching. We are tremendously indebted to Matthew, Mark, Luke and John who have given us an inspired account of all that Jesus did and taught. Recognizing the great value that a biography or autobiography may have, I decided to write and publish my autobiography. From a thirty day retreat I made back in 1977 I learned that an autobiography may not only be a blessing to the readers of it, but also to the author. The healing I experienced through the 800 pages I wrote at that time and shared with my director convinced me that the writing of an autobiography can be a blessing to the author, perhaps more than to later readers. I am so convinced of the benefit the author of an autobiography may receive that I would encourage parents and teachers to teach children, perhaps, by the age of eight or ten to begin to write a diary or journal. Very helpful to me in writing my autobiography was the practice I began about 1949 (When I was 22 years old) of keeping a journal or appointment book in which I kept a record of all the persons I met or places where I travelled, and things I saw, and reflections that seemed to be significant. In the course of writing my autobiography I became more aware of the many people who have had a significant role in my life and development. More important, I have discovered at a deeper level how important in my life has been the friendship I have developed with Jesus. I am convinced that Jesus has had a very important part in bringing into my life the many people who have touched and transformed my life. That is why I consider Jesus the first and greatest of all my friends. I heartily agree with St. Paul when he wrote to the Corinthians: “Brothers, you are among those called. Consider your situation. Not many of you are wise, as men account wisdom, not many are influential, and surely not many are well born. God chose those whom the world considers absurd to shame the wise; he singled out the weak of this world to shame the strong. He chose the worlds’s lowborn and despised, those who count for nothing, to reduce to nothing those who were something: so that mankind can do no boasting before God. God it is who has given you life in Christ Jesus. He has made him our wisdom and also our justice, our sanctification, and our redemption. This is just as you find it written, “Let him who would boast, boast in the Lord.” ( I Cor. 1:26 - 31)

Rev. Msgr. Francis A. Galles was born in Iona, Minnesota on March 8, 1927 to Charles and Virginia (Boltz) Galles. He completed his studies at Loras College in Dubuque, Iowa; the Catholic University in Washington, D.C.; and the Gregorian University in Rome. On December 20, 1952, Monsignor Galles was ordained to the priesthood at the Basilica of St. John Lateran in Rome by His Eminence Clement Cardinal Micara. Monsignor Galles’ assignments as Parochial Vicar were at St. John Nepomucene in Winona and St. Pius X in Rochester. As Pastor, he served at St, Francis Xavier in Windom, St. Augustine in Jeffers, St. Columban in Preston, St. Lawrence O’Toole in Fountain, and St. Patrick in Lanesboro, Other notable assignments include Religion Instructor at Cotter High School in Winona; Assistant Editor of The Courier; Diocesan Director for Family Life and the Spiritual Renewal Program; Spiritual Director for Immaculate Heart of Mary Seminary in Winona for three years and the North American College in Rome for nine years; Advocate and Notary for the Tribunal; Junior Clergy Examiner; Chaplain for the Sisters of St. Francis Motherhouse in Rochester; and Parochial Administrator for St. Columban in Preston, St. Lawrence O’Toole in Fountain, St. Ann in Slayton, St Mary in Lake Wilson, St. Ignatius in Spring Valley, St. Finbarr in Grand Meadow, and St. Patrick in LeRoy. In 1962 he was named Papal Chamberlain by Pope John XXIII and in 1968 he was named Domestic Prelate. On July 1, 1997, Monsignor Galles joined the rank of senior priests of the diocese, and continued to offer daily Mass several days a week at St. Columban Church, Preston, where he still lives, and also fills in at parishes throughout the Diocese on occasions.